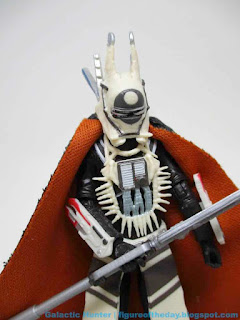 Bio: Enfys Nest was a human female resistance fighter who led the Cloud-Riders, a band of pirates and rebel group that fought against the crime syndicate, Crimson Dawn. (Stolen from Wookieepedia. Packaging has no bio.) 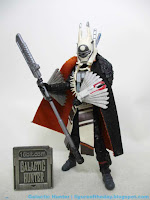 Commentary: A few months after a vehicle pack-in figure ($20 for the bike and the figure), we got a The Vintage Collection take on Enfys Nest! The good news: it's an improvement. The bad news - it doesn't have a removable helmet so you can see the character's face, so it's something of a lateral move. The earlier release was good enough to pilot a bike, so this new one has other positive qualities. The lined cape is very cool, the deco is improved, and of course you'll get more than 25 points of articulation.

When you pick up the TVC release, it's easy to see more color in the lined cape, the chest armor, and even on the boots. Added red stripes around the ankles and a slightly more off-white finish give it a look slightly closer to the movie. It's not perfect, but it's good for a figure that was in production prior to the release of its very troubled movie. And it feels rushed. 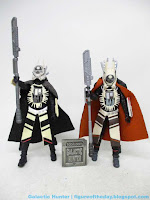 She has no problems holding her spear, but I'm not getting great poses out of the figure. The fanning-out gauntlet parts fall off with minimal provocation, which I dislike. They're also missing the stripes that appear on the middle of the feathery bits. The helmet deco could benefit greatly from a total repaint, but other than that, it's a pretty decent looking figure to live in a cardback or to stand on a shelf. The cloth cape is praiseworthy, but I don't think that this kind of hip articulation (or indeed, the articulation of these figures on the whole) lend themselves to being good toys. Compared to the 5POA figures - which just work - this one requires a lot of fidgeting, so if your idea of an ideal figural interaction is trying to find its center of gravity without knocking off any pieces, you're going to love it.

In an alternate timeline we would've had her appear in a Solo sequel or streaming series by now - heck, maybe she will reappear as the actress was also on Disney's payroll still for The Falcon and the Winter Soldier - but I wouldn't be stunned if we never saw another 3 3/4-inch figure of this character. This figure stood on my desk for months because I struggled to find something interesting to say about it. It looks good, but it's not perfect. It has a lot of articulation, but it ultimately doesn't serve the figure in a fun or interesting way. It remains the better of the Enfys Nest figures in this size, but again I would absolutely love to see Hasbro revisit this movie in a Kenner style at some point. (Or every movie, with maybe 12-20 figures per, would be a hoot.) She costs a bit more than she did three years ago, but given how absolutely everything has been skyrocketing you may find it worthwhile just buying her at a reasonable small mark-up until/unless she gets a return to the market.