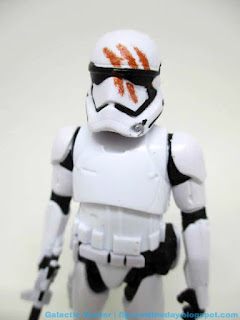 Bio: After his first taste of combat during a brutal First Order night assault on a Jakku village, stormtooper FN-2187 defects from Kylo Ren's forces, becoming a fugitive.. (Taken from the figure's packaging.) 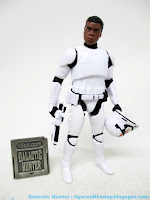 Commentary: I sat on FN-2187 for quite some time - well, it hung on a peg over my desk since 2016. Which is a shame, it's a good figure and probably should have been the first figure released in the line. It would've been a good Sneak Preview figure, had Hasbro still done those things. It's kind of fun to look at these figures later, with decent quality figures and a few oddball decisions that look even weirder in context.

The body is fundamentally the same as all the 3 3/4-inch First Order stormtroopers, which means it stands well, sits well, has a place to plug a blaster in the thigh, but can't sit. The legs don't swing forward all the way, so it's a rotten vehicle pilot - but if you need someone to stand at a cannon, he's great. The arms have no problems swinging forward, and the ball-jointed head is just the right size so the helmet slips on without too much friction. Having reviewed thousands of these things, it's kind of surprising to know that every figure you buy is something of a coin toss as to if the accessories will fit, or if the legs can be positioned in a way to fit in the vehicles. Kenner pretty much hit them out of the park in the 1970s and most of the 1980s, although I will say there's no question that the sculpting is a lot better on these newer guys. 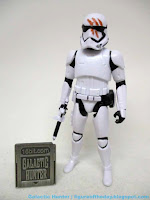 The Finn head likeness is good, and the blaster is a little loose in the plug - if you knock it, it'll fall out. Thankfully the helmet is more or less perfect, and if you just want a cool figure to stand on your desk - or stay on the card - it's amazing. The big cannon accessory is kind of dopey, and looking back on it, they're especially maddening. We got charged extra for these things. Sometimes less is more, but Hasbro was probably also wise to sell a figure at a higher price point at the time because the mania in 2015 was so high that people would likely have paid $10 just to get something new. That's one of the things I don't much love about the hobby - the prices seem to be somewhat fluid based on hype and availability. It wasn't a great impulse price point at the time, but when you can convince fans to line up at midnight to buy toys, such things really don't matter a whole heck of a lot. It's a great figure. It's no the best toy.

One of my go-to tests for "is this a good toy?" has been "can it pilot an old Kenner Landspeeder?" and in this case, the answer is "barely." I just fit him in the MTV-7 Mini-Rig I keep on my desk, and he can pilot it - but he's leaning back a lot. The figure ticks the boxes of what you need for a good action figure, but I think with better hips it would be superb. As it is, it's just OK - but since it's from the new trilogy, you're probably not going to care about this figure for another ten, maybe fifteen years as the kids who grew up on this trilogy may later decide to collect these things.