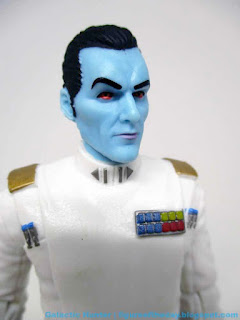 Bio: When Governor Pryce of Lothal wanted a stronger commander to dismantle the rebellion, the Empire answered with Grand Admiral Thrawn. Thrawn was a male Chiss, with striking blue skin, red eyes, and an angular face, known for his brilliant strategic mind and ruthlessness. (Taken from the packaging.) 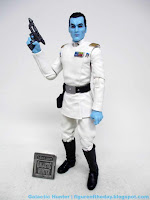 Commentary: Variant hunters will be cranky to know three flavors of Grand Admiral Thrawn exist. The first was a San Diego Comic-Con exclusive that left off the silver paint around his rank badge - but it comes with all kinds of accessories, making it unique. There's also an Archive version with different face paint. This is probably the least essential of the three, but it's the one that the most people are likely to have.

As a realistic interpretation of an animated design inspired by a character from a novel, the bar for success is incredibly low. Thankfully, there's not much to gripe about - Hasbro picked a good reference for the head sculpt (whoever it was), the hair looks great, and sharing the same general Imperial Officer parts and pieces means you can't really screw this one up. Thrawn is a gift to toy manufacturers because perfection isn't actually necessary to provide a good figure. All he has to do is be engineered well, colored properly, and stand - and he does all of these things nicely. Old-school fans may be annoyed by the slight differences in appearance from the previous action figures or the comics, but for a character that survived oblivion-by-retcon, he's marvelous. I still recommend it for any Gen Xer fans who are still here, or anyone who dug those early relaunch novels. It's not like Doctor Who or Star Trek showers this kind of love on the fans of their expanded universe materials! 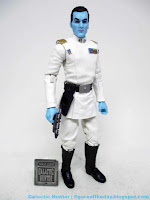 Sharing parts with Grand Moff Tarkin, Admiral Motti, Admiral Rampart, and General Veers, Thrawn is one of those figures that got to exist thanks to his appearances on Star Wars: Rebels after debuting in the decanonized Heir to the Empire novel and its sequels. That's why the uniform looks different - while it is still white, the epaulets have been replaced by gold bands on his shoulders. You also got a variant skirt with a holster for his blaster, which his a nice touch. Sadly no ysalamiri was included, but one just came out in 2021 with a Luke figure. Unsurprisingly, Thrawn sold incredibly well and like most new figures of characters over 25 years old, proved to be tough to find during his initial offering. (And 2021 reissue.) 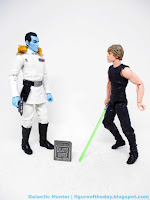 Typical of 2017 figures, Thrawn has double-jointed knees, a skirt that blocks hip movement, and elbows that bend just a little better than 90 degrees. In other words, he's good! The pistol fits in his hand or holster without any fuss, and the uniform looks great. You get the Rebels series-inspired flourishes on the neck and shoulders, but aside from that he's the same blue-skinned, red-eyed Thrawn we've come to know and love since 1991.

If you can get a Thrawn - this one, or one of the other editions - I recommend it highly. He's also kind of expensive these days, so keep that in mind if you spot one at a toy show, garage sale, or dusty shelf in an old comic shop.