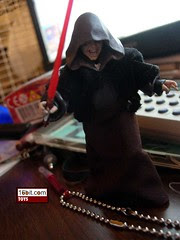 Commentary: After seeing the pictures and hearing the complaints, this Darth Sidious went from being a long-awaited fan request to a turkey. But after getting it, I'm not complaining-- it turned out pretty well, particularly as a toy. While it does retain some of the feel of the Evolutions Palpatine of 2005, this mostly (if not entirely) new figure (I'll cop to not checking it against my entire archive) turned out great. I've got him standing in weird action poses and he doesn't fall over-- this is a winner! The opened snarling face is great, and while there are bits that remind me of previously released versions of the character, the mouth is undoubtedly new. His exposed hands have dark fingernails, which is another really nice touch.

The costume is great, but not perfect. I've heard a lot of complaints (and may have had a few in my head), but comparing it to the publicity shots, the figure seems mostly on the mark. The little jacket cloth piece is actually pretty close to the real thing, it's just a small opening down the front of the garment that the figure lacks. (This is obfuscated by the Boba Fett sticker and darkness on the card.) Other than that, he's a pretty perfect Senate Duel Palpatine figure, and I would say that this is certainly good enough for my liking. If I had to insist on something to be altered, I'd probably toss in a head that doesn't look like it wants to eat my brain-- this guy looks positively evil. I'd love to see a head suited for being seated at his desk too, but if I had to pick, this is the better head. Hasbro did well.

The sculpted costume bits are actually really nice, too. His hood can be posed to reveal the face or obscure the eyes, which I love. His hands look creepy, his sleeves are poofy, and there is a lot of detail under his robes of state. The Vintage line has had a lot of ups and downs in its first two waves, but this is a genuine highlight. It's my new favorite version of the character (as seen in the prequels) now that I can play with it, and while your mileage may vary I would strongly suggest you convince your friend to buy one so you can play with it. I hope you won't be disappointed, because I like this one.

Collector's Notes: This wave surprised me once I got my hands on it-- this figure in particular caused me to do a quick about-face. I see him here and there, and my guess is he'll be phased out due to the fact that Palptine is not exactly one of Hasbro's best-sellers. Since 2005, we've not had many carded versions. There's the 2009 ESB Holographic Incarnation and... whoa, is that really it aside from repacks? Show your support for evil and buy one.

I really like this figure and can't agree less with the people who are throwing copious amounts of hate at it. It really evokes the whole Senate duel scene so well!!!

This was the first TVC figure I was *really* looking forward to, and it didn't disappoint. It's clearly supreme over ever other Sidious and Emperor figure I own (and I have 'em all).

However, I wonder whether Hasbro should have named the figure "Emperor Palpatine." The Senate Duel scene happens after the Empire has been declared, so, technically, isn't the character "Emperor Palpatine" at that point?

The figure is clearly intended for the ROTS wave. However, technically, if this is the "definitive" Darth Sidious, then the cardback *should* display the original Sidious, which was released as part of the Episode I line.

As you can tell, these nits have been picking away at me lo these many weeks.

The figure is probably called such because Yoda refers to him as Darth Sidious. Though I'm wondering why Yoda assumed that was his Sith name. Was he going on half-truths Dooku said to Obi-Wan? Was their some part of the holo recording at the Jedi Temple that called Palpatine such? I suppose there's an EU reason.

Still, nothing explains why Obi-Wan called Palpatine "the Emperor" at the same time Palpatine was declaring the Empire into being.