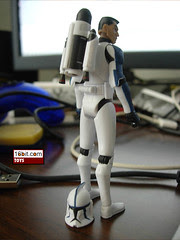 Bio: Denal is part of a mission to destroy a Separatist listening post. He and the team use rocket packs to reach the post. The clone trooper battles deadly droids and, although injured, helps Captain Rex reach the reactors and plant thermal detonators. (Taken from the figure's packaging.)

Commentary: While he has an awesome helmet and cool rocket pack, there isn't much else remarkable about Clone Trooper Denal from the front. His deco is very similar to any other ordinary blue-striped 501st animated clone, but he has those... tears or something on his helmet, which adds a little character. The figure's head is essentially the same as 80% of the other Clone Trooper heads, with the flat hair and familiar facial expression. It's by no means bad, just nothing new. If you're clone crazy, you know you need this one, but if not it may not be of much interest. I love the design and the articulation is pretty excellent, but when you get right down to it, it's another Clone redeco. There's nothing wrong with it, but considering it's hard to get these days you may balk at paying a premium for it.

Collector's Notes: Thankfully he isn't very expensive yet. On eBay, he's about $10. Also, on the show, Denal was killed and Cad Bane stole his armor-- and Hasbro has a planned figure in the works. If you leave the helmet on, they're pretty much the same design.

$10? He was easy to find for a few months but as places marked down the older packaged figures, they sold fairly fast.