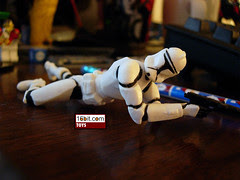 Bio: Virtually indistinguishable from one another, Clone Troopers are identical in physical appearance, mental capability, and stamina. Part of a clone army, they are grown in the cloning facilities of Tipoca City, a luminescent city of industry emerging from the raging seas of Kamino. Although clone troopers share the same modified genetic code, their genetic structure has been altered to make them less independent than their genetic host, and their growth has been accelerated to twice the normal rate of a human. Grown and trained specifically for military combat, the Clone Army was mysteriously commissioned ten years earlier. (Taken from the figure's packaging.)

Commentary: Back in 2003 Hasbro started to get what Clone Trooper action figures should do for them-- act as a cheap cash cow. One mold could be painted many times over, and this particular figure was a shining example of that. The same SKU had multiple configurations, many of which contained this specific figure. The trooper is down on his belly, not quite sniping, not quite crawling, but clearly ready for some sort of muddy combat. Considering that, at the time, Hasbro hadn't released a lot of troopers in 2003 this was a fast seller because people wanted Clone Troopers. Good, bad, it didn't matter that this one couldn't stand or sit-- it was a figure, dammit, and that meant something. With very limited articulation, really the only meaningful thing he can do is move his head around. While a little more exciting at the time, in part because it recalled the MicroCollection and MicroMachines lines, today it's pretty iffy. If you build dioramas, it may have some value, but otherwise there isn't much you can do with it. You can't set it up for other figures to knock over, it just lays there, motionless, wishing to be played with but most likely becoming part of the scenery. I would say that this is another reason why "dead" figures aren't appealing-- it's just not exactly a fun toy. The sculpt is good, and the deco shortcuts-- all the grey has been removed-- are interesting to note, plus the set had 3 figures for $10. You got a lot for your money, sure, but you might have some difficulty finding something for this particular figure to do. It was a clever idea, but "posed soldier play" has never been a big part of what made Star Wars successful.

Today this set is mostly a curiosity. The super-articulated bodies have all but eliminated the need for this kind of cheaper figure, so odds are this relic has now seen the end of its run. Similar figures were released for the final prequel in 2005 before seeing what seems to be permanent retirement in 2006.

Collector's Notes: This mold was repainted in red, as every figure in this set had one alternate deco available. Individually, packs with this figure go as high as $15-$20. This is also what a lot sells for. Happy shopping!

Some of those sets came with field scanners rarely (if ever) seen again.

It's kinda disappointing that even with Super Articulation, the SA clones can't do all the preposed clone poses. But then, poseable toes on a 3 3/4" figure aren't likely to happen.

Also, I think it's a tad odd that they sculpted 4 different troopers, when they could've used the AOTC preview Clone Trooper, who only had like 6 points of articulation. Not likely to have broke the bank. Heck, they could've used part of the mold and made the legs stationary.

This came out when I started sort of buying SW stuff again... I had one of these packs and the regular clone trooper from AOTC. they seemed cool to me at the time, and I was vaguely aware of all of the variants (such as the binoculars one my boy Bravo mentioned) but never, ever saw them in stores.

this is one of the few SW toys I display. my Millennium Falcon sits atop our DVD storage thing along with some of my roommate's toys and mine, and I sneaked this little guy in there because he was the only one who'd fit.