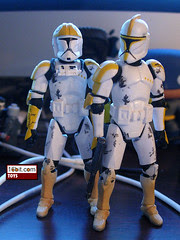 Image: Adam's desk. Both figures are the same figure-- one figure includes both helmets, I just happen to have two of them there.

Commentary: Going through my boxes it's amazing to see what figures I missed in this column-- this Clone Trooper being a prime example. Back in 2005 Hasbro positioned its "Evolutions" line as a successor to Vintage with a better bang for your buck, incorporating prequel characters, and (generally speaking) a vastly superior number of accessories. The first few sets pulled it off nicely, particularly the Clone-based ones. With this Attack of the Clones figure, the company took one step forward and one step back. The big improvement was the decision to make it two different troopers in one, as both "pilot" and "trooper" helmets were included on a nicely battle-damaged body with yellow Clone commander stripes. The result may not be a perfectly authentic clone pilot, but it is indeed a pilot-- a figure that, on the whole, has been in shorter supply since 2002. (AOTC-based movie pilots were available in 2002, 2005, and in 2009. And weren't always easy to get.)

Rather than just put a new head on an old body, Hasbro created an all-new sculpt here (which it later repainted). In a departure, Hasbro removed a joint-- there's no waist joint here, so the figure has super articulation minus that one spot. Considering most pilots stand or lean in their vehicles, which at the time consisted of Republic Gunships mostly, the extra joints weren't necessarily a requirement. The sculpt was very good, but the deco is remarkable. Hasbro has tried a lot of experiments in battle damage, and this one has a pretty striking pattern. Before this one, "battle damage" usually meant black dots or a sticker, or some iffy spray job. These looked like dents and blast marks, which was a step in the right direction. While not the best jointed Clone ever, the deco (and helmets) make this one absolutely worth owning twice over-- it'll add a little variety to your army which, I assume, is pretty big by now.

Collector's Notes: These sets were incredibly hot in 2005, so much so that two of the figures from this very set would be rereleased and repainted a few times. The Sandtrooper had a variant, a repaint, and an individually carded release. The Star Corps trooper saw multiple repaints in several sets, plus a few redesigns. But this Clone? Just a couple of repaints, and the yellow-striped version is exclusive to this set. eBay pegs the value of the entire Evolutions set this Clone comes from at about $10 before shipping, which, really, is pretty sad. Any one of those three figures could probably sell just fine in Saga Legends.

i got this set when it first came out, and the sandtrooper's arm immediately snapped off at the elbow. it's still glued on to this day.

i don't really army build, but this set is maybe why i have a thing for the yellow clones. i have 5 or 6.

Never got this one. The lack of any waist joint is a bummer. The two helmets are nice, because you just might find a used helmetless clone someday and there are few cheap ways to get extra helmets.