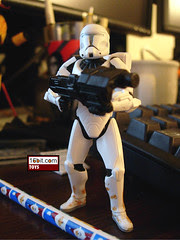 Bio: Only one clone commando lives to report what happened on the derelict factory moon of Asturias. While the commandos are escorting Director Lorca Oviedo, Oviedo's ship malfunctions near Asturias. Coming out of hyperspace, they are attacked by Separatist forces and crash on the moon. The commandos are attacked by super battle droids, droidekas, and battle droids, as a twisted web of lies and betrayals threatens them all. (Taken from the toy's cardback.)

Commentary: In 2006 the reaction for Scorch, a clone action figure from Republic Commando, was so great we got the rest of his squad quite quickly-- and by the end of 2007 we even got this all-white Clone Commando in a comic pack. Based on a Tales story, this figure reused the same basic design and tweaks it. The unique character coloring is gone, as are the distinctive backpacks and armor bits. The figure is as you see it, reasonably devoid of extra gear in addition to ankle and knee joints. Fans cried bloody murder that these figures had a mere 10 points of articulation when many of their peers were 12 or 14. While I understand the desire for added joints, I dislike added costs, so I can get behind this figure being what it is pretty easily. He can stand and hold his weapon just fine, and the all-white look is unique given that, at the time, many of the Clone figures were brightly colored.

The sculpt, while good and largely accurate to media portrayals, does little to wow anybody. It's still good, it's just that Hasbro figures have seemingly hit a ceiling in 2007 where there wasn't much you could do. Once you hit "awesome" it's hard to go beyond that without really redoing how the line works, and while I think in 2010 we're seeing some dramatic improvements, the figures of 2007 are still fantastic. Along with his companion droid figure, this is a wonderful set. Get it.

Collector's Notes: While fans moaned, this is a good set. How do I know this? It sells for a lot on eBay. The free market has spoken, this assortment largely didn't sell in some stores, but this figure set sure did. Expect to pay $30 or more if you want one.