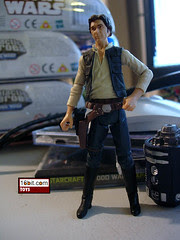 Bio: Han Solo became caught up with the Rebel Alliance, courtesy of Obi-Wan Kenobi, Luke Skywalker and Princess Leia Organa, whom he helped rescue from the Death Star. Solo helped Skywalker destroy the Death Star when it attacked the Rebel base at Yavin 4, where they had taken Organa. Solo became an unofficial member of the Rebel Alliance, and fell in love with Organa. He helped destroy the Second Death Star at the Battle of Endor. (Stolen from Wookieepedia.)

Commentary: It's rare where I can point to a figure that's six years old and say that Hasbro perfected it and should never bother upgrading it. This Han Solo is one of those figures. Since being released in 2004, Hasbro has never done a basic Star Wars Han Solo again and, to date, never bothered to reissue this one. (A retooled version was released in 2007 and another in 2009, plus other figures based on this design were released-- but this one was perfect and this configuration is a one-time release.) If you only have one Han Solo in your collection, this is it. You simply will not get a better one at press time, and unless Hasbro has something super-special in store that adapts Pre Vizsla's hip joints and a better head sculpt, you probably flat-out can't improve on this one. It's Han Solo, space adventurer, minus any wacky Stormtrooper helmets or iPod headphones.

Han has 14 points of articulation, blue pants with red stripes, and a holster that not only carries his blaster but hangs in a way that doesn't look like it's breaking or ill-fitting. While a separate piece, the holster doesn't prevent him from doing too much sitting, but it does inhibit movement at the hips only slightly-- and this is something it doesn't seem Hasbro is actively aiming to improve right now. This isn't a knock at the team, it's just I don't know how you can have a separately molded belt that hangs down on legs that are expected to bend. (If you can figure it out, NASA has a large cash prize waiting for you.)

The likeness and pose are, in more ways than one, vintage Han Solo. He can replicate the pose of his 1978 figure or any of a number of famous photographs, while the head sculpt is one of Hasbro's better efforts. The torso with its non-removable vest seems nothing short of perfect, and the scale of this figure is also right on the money. Hasbro managed to make a slightly friendlier version of the cocky space pirate, but you can pose him to add a little bit of snark if you'd like. This is the best Han Solo you may ever see in this line, so add it to your shopping list.

Collector's Notes: I actually bought a spare one of these for $1 at a Wal-Mart in 2005. Proof that the mass market has no taste? I think so. There don't seem to be many on eBay but the few I see are about $10. That's fair. Go get one.

I totally agree with you, this is THE Han Solo figure. I've used him in a few of my stop motion projects as well as a bunch of photos. I haven't managed pick up another one yet, but I did take a couple of other Han's that I have and kit bashed one that is very very close.

I still think it looks more like Michael Richards (Kramer) than Harrison Ford.

I find that this Han Solo and the BD-34 Ben Kenobi are possibly the two best human figures Hasbro has ever done.

I think this is the best Han Solo out there. I picked up two on ebay for about $10 ea. One to have out and one to keep in the packaging. No other Han has come close to this one except for the OTCV Return of the Jedi Han in trench coat. Now all we need is Hasbro to give us a great ESB Han and all will be right in the world. For now.

By the way, congrats on 1,400 reviews. A ton of great work to help out the SW fan masses.