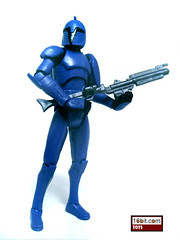 Bio: A Senate Commando captain and his elite commando team confront suspicious arrivals to the Senate building. The captain and troopers rush to the platform where Cad Bane has landed without permission. They are prepared for a fight if necessary, but are taken by surprise when Bane springs his trap. (Taken from the figure's cardback.)

Commentary: This Senate Commando figure is new, but reuses a lot of old parts. The body is a reuse of Captain Argyus, which itself is essentially a Clone Trooper with a new head, a new left shoulder, and new forearms. (The mold was notable for having the elbow armor attached to the lower arm.) The helmet is new, but the rest of the figure is recycled. Because of the reused parts, this blue figure has a ton of articulation. Along with the mega-jointed wrists, there's a grand total of 14 points of articulation, which is essentially "standard" for the line now. Since the helmet looks cool and it's very similar to previously released figures, there's not a lot of insight to offer you here. He includes the longer rifle and looks pretty cool. It's a nice design, so don't wait and miss it-- just grab one now. If you don't like it, you can send it to me, I could use a few of these.

Collector's Notes: This is the first generic cartoon Senate Commando. So for those keeping score, there are two different captains and one generic trooper. Hopefully Hasbro will card this one individually later but for now, this is it. It came out as part of Target's massive exclusive onslaught in October 2010, which, if you bought everything, would set you back over $200 easily.

On my Argyus figure, the elbows don't bend in enough for my tastes...wish they'd stop that. It's enough to not make me pay full retail, honestly. They do look cool.