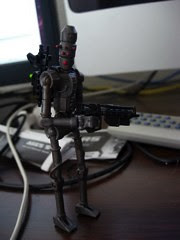 Commentary: For some reason, Hasbro really loved repainting the IG-86 mold. It's a nice mold-- one of Hasbro's best, given it had wonderful articulation and tons of joints allowing for surprising amounts of weird poses. This version was released in the super-cool Ambush on the Vulture's Claw Battle Pack, and is-- say it with me-- just different enough to make you mad. There are no fewer than four distinctive versions of the figure, not including variations with in those versions, and this one is a favorite due to how Kenner-y it is. It lacks the scrapes of the first release, but has a little dirt on him. The red lights are still present, the backpack is here, and his guns are black-- the previous release was blue or grey, His deco is very similar to the Cad Bane and IG-86 2-pack sold at Target a while back, but different enough. You know the drill.

The figure's ability to stand and sit is hard to beat, with shoulder and hip joints which can swivel out and let him do jumping jacks, were you so inclined. It's an impressive specimen and not one Hasbro has tried to top as of late. As such, get one-- if not this version, one of the others, because it's a strong mold. And in his other forms, cheaper.

Collector's Notes: The secondary market asking price for this set is quite high, but it looks like there are few takers. I love this set to pieces, but it's not worth $100. The $50ish going rate seems a bit better. I hope Hasbro reissues it.