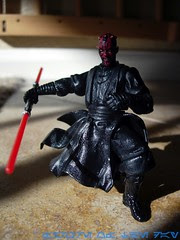 Bio: Darth Maul has undergone years of demanding and brutal training under his master Darth Sidious to become an incredible Sith warrior. He demonstrates his skill by expertly spinning his double-bladed lightsaber. He attacks with precision and ferocity, twirling the twin blades to strike his Jedi opponent. (Taken from the figure's packaging.)

Commentary: Based on a 2002 Expanded Universe release, this Darth Maul takes the old Sith Training Robes release and actually removes elements. The 2002 release had added red striping on the outfit and a magnet in his hand, plus a few Sith Probes. This? This doesn't have those.

So yeah, it's lacking in stuff. The lightsaber is the basic Maul saber from 1999, but the dials are still on his back. One rotates his right wrist, the other raises and lowers his right arm. As a mechanism, it's pretty cool as it effectively gives you some ability to control his motor skills beyond "hit this button and his arm flails wildly."

Ultimately, I feel this-- and a lot of the Movie Heroes repacks-- are sort of lazy and sort of neat. From the angle of "this is different and therefore notable," it's cool-- new versions of Maul that are genuinely different aren't common. Still, it's just the same ol' 2002 figure, at twice the price, with fewer accessories. For the record, he's got just north of 10 joints and was released just before ball joints started to be a thing. Each knee has two cut joints which allow for some great combat poses, and the overall level of detail is actually quite good. The texture in his robes are great, but it struck me as Hasbro passing off an existing figure as "movie Maul" just to get something on the shelves faster. Soooo.... yeah. Maul Enthusiasts Only, maybe?

Collector's Notes: You could do better. You could do worse. You should be able to get this one at retail with a little effort, as in, "go outside and live in North America."