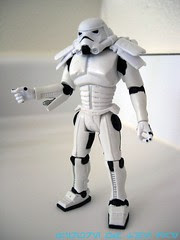 Bio: Spacetroopers are high-ranking Imperial commandos who wear powersuit armor designed for space combat. These Zero-G Assault Troopers are considered "walking tanks" because of the extensive weaponry built into their suits. (Taken from the figure's packaging.)

Commentary: The 1998 release of this figure became something of a rare item, and the 2010 Spacetrooper wasn't much easier to find. It was rereleased in 2011 with Wioslea's blaster, meaning you can get it, but if you want the BG-J38 build-a-droid part it might mean you need to spend some effort. Slightly taller than the 1998 release, this figure was delayed a bit (coincidence?) and also part of a final wave, just like his ancestor. He's a little bulkier, whiter, and has more painted detail-- oh, and more articulation. In all honesty, the only thing the 1998 has over the 2010 release is the forearm-stored blasters. In 1998, the sculpt was designed so it could be put away. In the 2010 figure, it's permanently out. He can stand, he looks cool, but the funny thing is that this one was one of the few 1998 Expanded Universe figures I had no real associations with, and I still don't. I didn't realize where he came from at first, I discovered him as a background character in the comics but even then, it's not like he struck a chord with me to the point where I am particularly excited about him today.

It's a nice figure. It looks cool, it has a jointed rocket pack, but it's one of those figures that basically goes straight into the storage bins for me. Even though I'm not familiar with all the characters from the comics, novels, and so on, the few books or comics or games I do experience often tell me enough about who they are, and Wookieepedia is good at filling in the rest. This guy is just kinda there-- a cool-looking trooper, but not one with sufficient personality. Another Spacetrooper was made in 2009, but that one was just a normal Stormtrooper with a bunch of space gear. And oddly, I had a stronger connection to that one.

Collector's Notes: This figure may still be available on the 2010-style Saga Legends cardback, and I give kudos to Hasbro to putting him out again. I hope they do that more with other troopers. Today you should be able to score one for $8 or less before shipping.