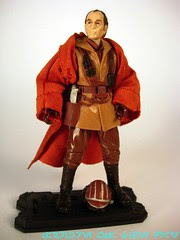 Commentary: It's bizarre to write about remakes of figures that I bought "new" over ten years ago, but here we are again with Ric Olie. Back in 1999-- and 2000, and in some areas, 2001-- he was a figure that tended to sit for a very long time. I think I even saw some in grocery stores in 2002, which is why I was really surprised Hasbro decided to mine this character for another go. According to the data I have now, this figure will not be on a Vintage cardback but the Naboo Pilot may be. (I say "may be" because it wouldn't stun me if Hasbro decided the current distribution was sufficient.) But Ric Olie? This is probably going to be his only appearance this year, and I would probably consider assuming this would be his final action figure appearance period.

Olie turned out well, and this is going to be the definitive figure. He shares tooling with the Naboo Pilot, with really only the head and helmet being different. Olie's goggles are down over his eyes, and his blaster now fits in his holster. As I type this, I do not have the new 2012 Naboo Fighter so I don't know if he'll fit. The quality of the sculpt is excellent, and obviously 14 points of articulation trumps the original's 6. However, 6 was sufficient for the pilot figure, the quality of the sculpt was pretty good, and this wasn't a character anyone was demanding. I'm glad Hasbro made Naboo pilots for 2012 and the Starfighter's reissue, but their exclusive status is interesting-- why does Walmart have all the pilots for the non-exclusive vehicles this year?

Ric Olie's duster is a cool accessory, and Hasbro did do a nice job updating him for the modern age of action figure collecting. Still... your old one is probably just fine. I buy these things due to deep emotional scars which can only be healed with plastic. If you're in this boat too, or if you missed the first Ric Olie, go ahead and buy this new one. Ralph Brown thanks you.

Collector's Notes: You may be able to find this at a store near you right now. Surprisingly, this entire wave seems to have been stocked at even the smaller, shall we say awful Walmarts in my area.