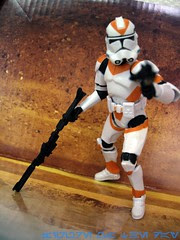 Commentary: OK, so this Clone Trooper is basically the 2010 TVC release, except with some paint. The plain white one was pretty bland, particularly since many samples came missing a few markings. This one makes up for it, and while his helmet isn't a fan favorite, it's nice to have a super-articulated 212th Clone Trooper with hip joints. I like the guns-- the smaller, basically more authentic ones-- but they aren't painted. The armor itself has black and orange, and lacks the slick battle damage of the 2006 release... of which I have many. This figure is a great addition to a squad to mix things up and add some variety, but visually it doesn't look better than the cheaper 2006 ancestor.

If you like figures which work well with vehicles, or are pretty neat at being posed, this is worth snagging. Just don't overpay for it, there are more 212th clones out there from other releases, gift sets, and so on.

Collector's Notes: Of the token "repaint" wave of early 2011, this one seemed to disappear the fastest-- and Hasbro got this weird "oh no! Troopers don't sell!" attitude around the same time, not taking into account that it's because they just came off of two very plain, very boring troopers during a price increase and neither of which were particularly interesting to look at. So yeah, this dude suffered. Will the same happen with the much-delayed TVC 501st Trooper? (Probably.) I'm so old I remember the days where Hasbro would make a trooper and stick it in cases for months to come, I reckon.

Really liked this figure,but every time I saw it at retail it was severely yellowed.Never picked itup, because I was never able to find a good one.

No mention of the yellow helmets?