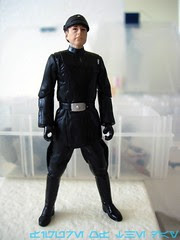 Commentary: The Moff Jerjerrod body has been brought back to bring you Colonel Dyer. This is the only version of this character, which I believe is currently the closest release to the vintage "Imperial Officer" action figure-- he's got gloves, he's wearing black, that's pretty much all I'm asking for in terms of requirements here. (Nevermind the fact that the original officer was an Empire Strikes Back release.) Between this figure and Warok, I would consider the Battle for Endor Battle Pack a required purchase for anyone looking to get modern updates of the original 96+ Kenner action figures. (92 + Yak Face + 3 R2s & C-3POs +...)

Anyway. Hasbro is pretty good at making the most out of an old mold, as Dyer is basically a figure you already bought with a couple of tweaks. The torso is similar, the head is new, and of course he's wearing black-- but it's basically Moff Jerjerrod. This means he has no knee or ankle joints, his elbows are cut joints, and he doesn't sit particularly well-- and that's OK. I'm assuming most people are going to be getting this figure for dioramas or shelf displays, and this figure isn't much to play with. He looks cool, but he won't be doing a lot of sitting. His stormtrooper blaster accessory is quite nice, and the coloring of the figure is, obviously, decent-- it's hard to screw up "black uniform." For classic Kenner fans and Imperial loyalists, this is one fine figure-- although the set of Luke, Dyer, and Warok makes zero sense as a group, each individual figure is totally worth your while and I am quite pleased Hasbro cranked them all out together.

Collector's Notes: Despite being tailor-made for the original trilogy collector, this set lingered and was available quite cheaply at certain retail (and deep discount) outlets. If you were lucky, you could probably have scored it for as little as $10-$15, but now it's closer to $20-$25. It's also totally worth it for the best Battle Poncho Luke, the only Warok, and this nifty Imperial Officer figure.

Email ThisBlogThis!Share to TwitterShare to FacebookShare to Pinterest
Labels: Empire, Return of the Jedi, TLC