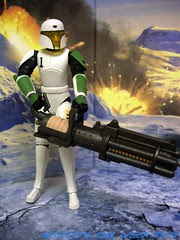 Bio: Clone Trooper Hevy trains for battle on Kamino. Hevy is part of Domino Squad, which is doing poorly in their training exercises. During one battle simulation, the trooper practices with a Z-6 rotary blaster cannon. He and his squad members ultimately overcome their differences to work together successfully as a team. (Taken from the figure's packaging.)

Commentary: Ah, Domino Squad. They deliver... the pain! (Sorry.) Clone Trooper Hevy was the first of (so far) two clones in the padded training armor, the second of which just hit recently. I like the figure's unique armor, and the "1" scribbled on to his chest helps to point out that he's in charge. Well, he's in charge of the group of losers, anyway. His removable helmet has a clear visor, a nice touch for dramatic purposes on the show. It's unique in the world of figures because Hasbro very rarely releases troopers with a clear visor, except Rebel pilots and the cut-out helmets of a few Rebel hijackers from the Empire comics. Where was I? Right, Hevy. You wanna get Hevy.

His giant rocket launcher is painted in spots, giving it a lot more detail for pennies. It's great, I dig it. The yellow helmet is open to his plain ol' standard-issue head, complete with the flat hairdo. He has a little difficulty sitting, but that's OK-- you want this guy to stand and shoot anyway.

Collector's Notes: This figure is fairly common, if you have a store which hasn't cleared out the 2010-2011 style packaging you should be able to get him. Cheaply. This mold has only been redecorated once, so there are opportunities to do up the rest of Domino Squad and other teams, too. I'm game if you are Hasbro.