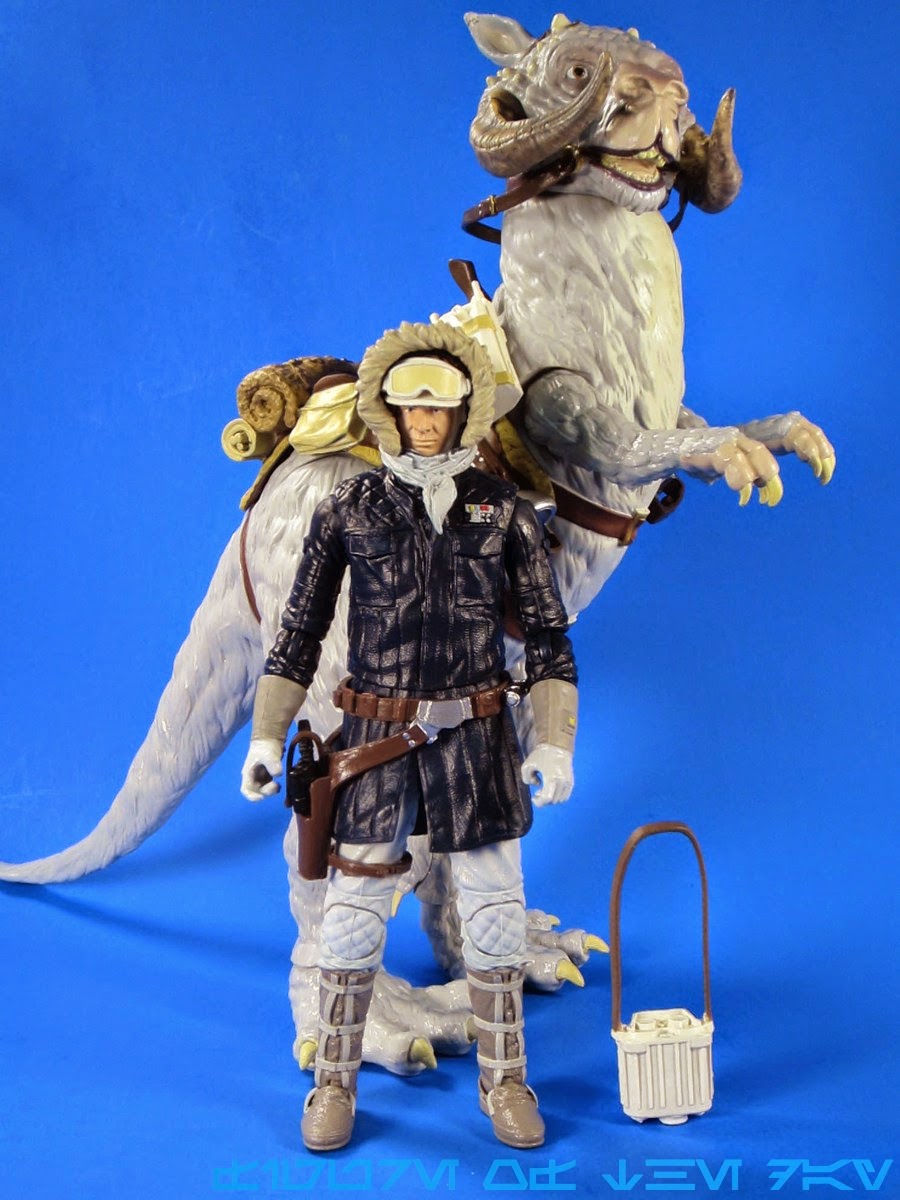 Bio: When Han's Tauntaun dies of exposure, he uses the beast's body to keep the badly wounded Luke Skywalker from freezing to death until the pair can be rescued.  (Taken from the figure's packaging.)

Commentary: There's no doubt that this Han Solo and Tauntaun 6-inch action figure set had some compromises in its design, but for the asking price it's pretty spectacular.  Consider if you will that the last couple of Tauntauns were $25 a whack - one was a solo beast, the other included a couple of figures - and this upsized version is a pretty good deal.  It doesn't have the same level of creature articulation, and there are a few areas where Hasbro could probably have spent a few nickels to make something spectacular, but compared to Jabba or the Speeder Bike at $40 this thing is killer. 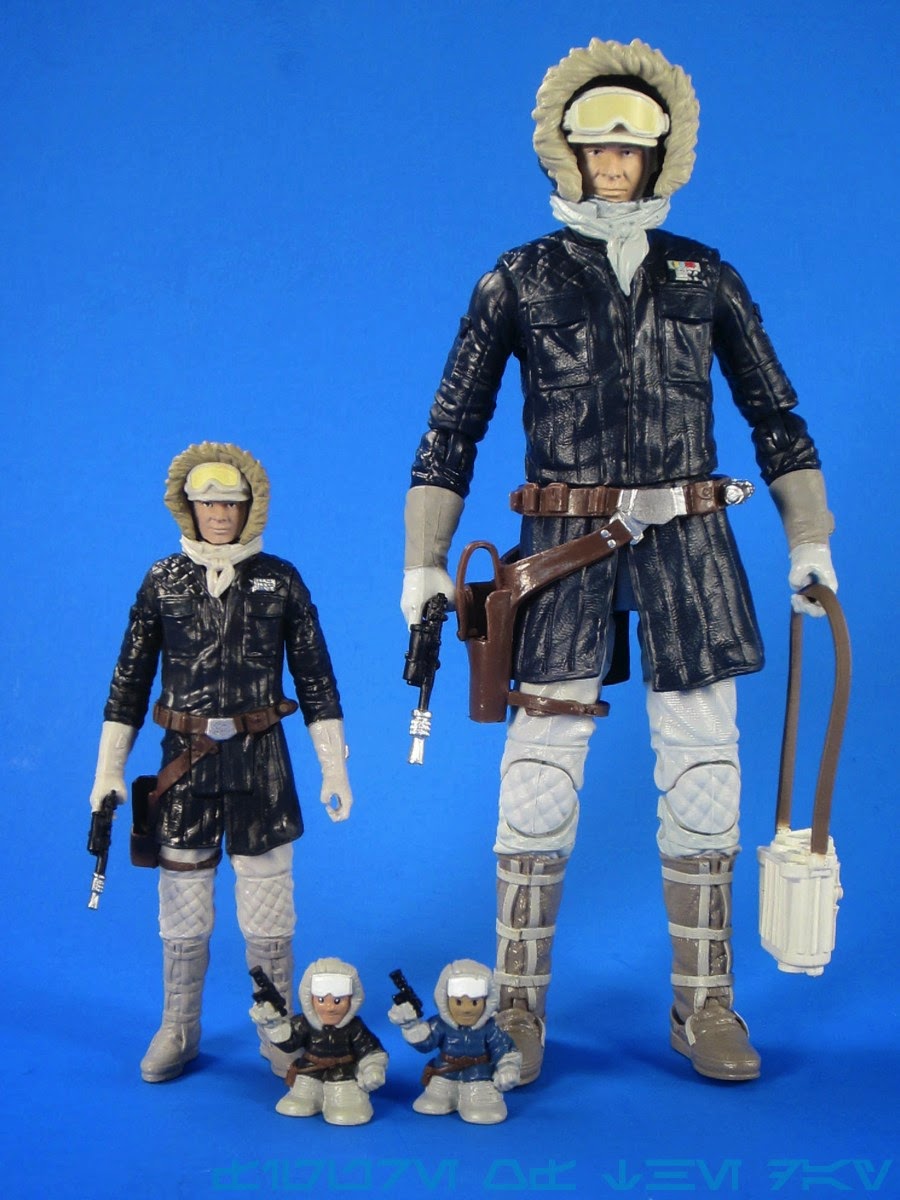 Han Solo has something like 23 points of articulation, depending on how you want to count.  He has only one waist joint and his wrists only swivel and don't bend... but he comes with a Tauntaun.  The Han Solo figure has a working holster, rocker ankles, and a removable hood with a thermal capped head underneath.  His goggles are fully removable, but getting the goggles under the hood is a little tricky.   The figure is a little light on painted detailing, making it look more like a big toy than a high-end collectible. 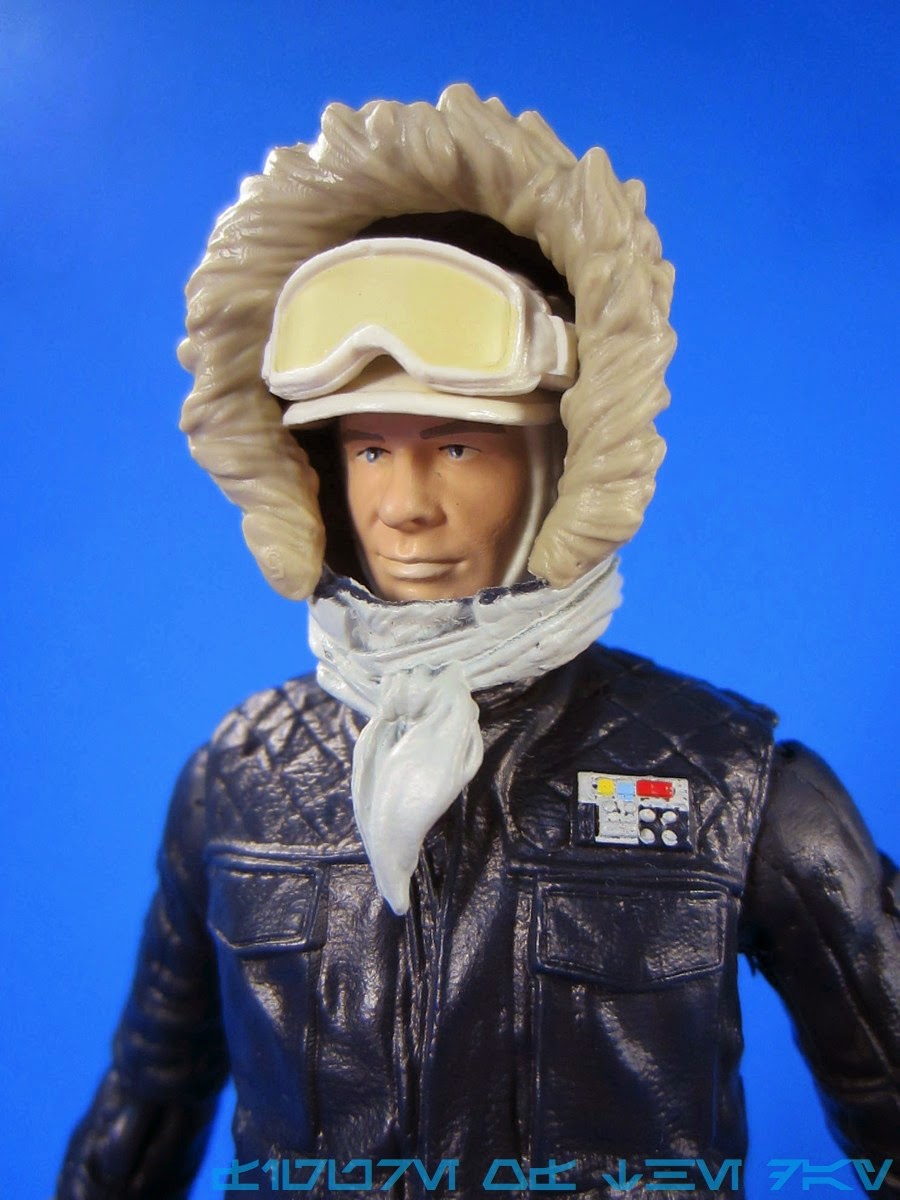 I'm OK with this but it runs counter to the line's initial offerings.  Han's head is more doll-like with simplified details and a good sculpt that's appropriately Han-esque.  The figure is sturdy and stable, standing well or fitting on the Tauntaun about as well as any other Han over the past 19 years.   Nothing will probably ever beat those trap door figures Kenner made 35 years ago, but such is life.  I should also note his binoculars are a little too thick for his hands, and are basically there to look good or hang from his neck or shoulder.   Had Hasbro left it out, odds are you wouldn't miss it much.  I'd rather they have spent the money on making the googles clear at this scale, but again, what can you do?  It still looks cool and is an impressive figure. 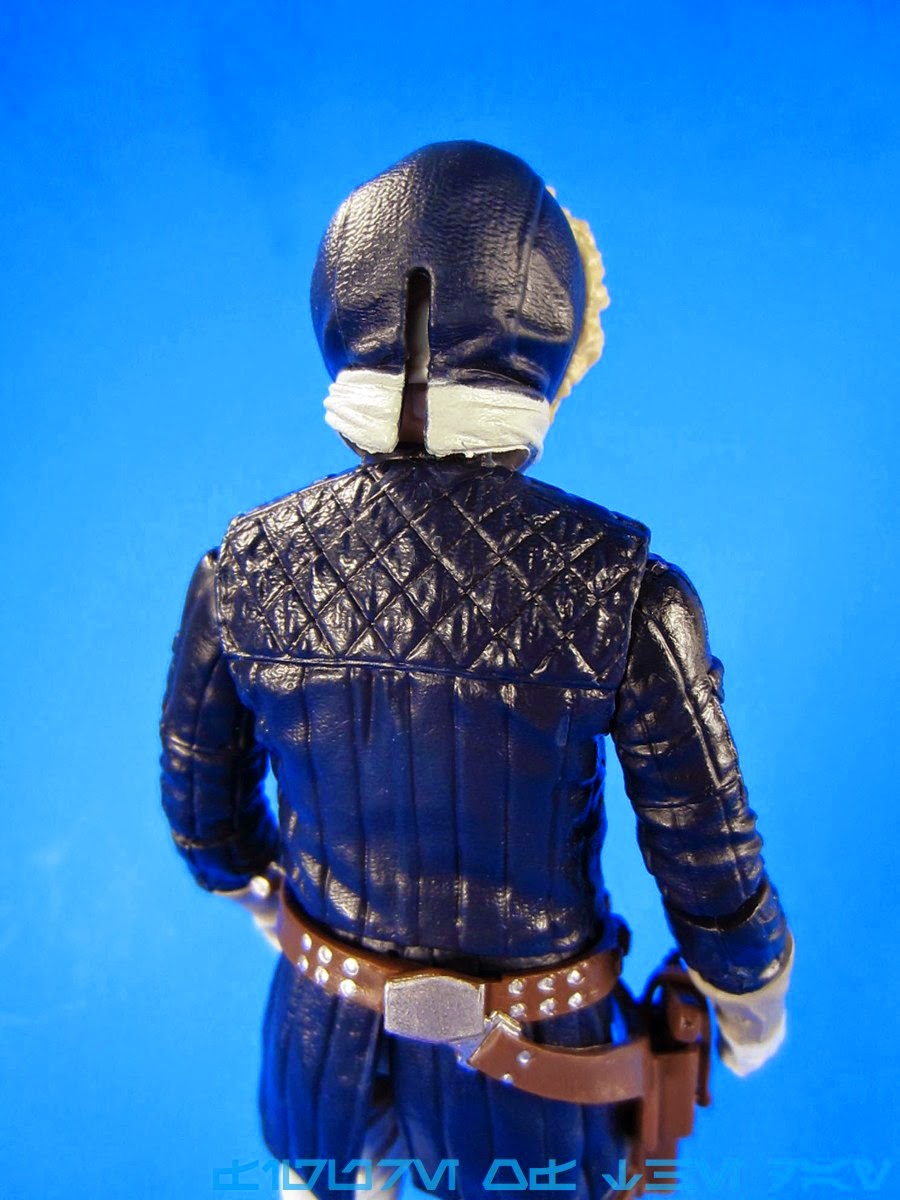 I should also note Han's hood construction is pretty clever.  The hood has a slice up the back so you can pull it off without tearing.  Underneath is the thermal cap and you can place the goggles over the brim of his cap or on his eyes, but it really looks best on the brim.  You can see more pictures below, because there are lots of pictures.

I was less impressed by the Tauntaun when I saw packaged shots showing up, but in person I'm immediately reminded of the crazy awesome (and utterly bonkers secondary market prices of) Target's exclusive 12-inch Tauntaun set in 1997.  The figure is a little less wobbly, btu is otherwise about on par - you get swivel joints at the arms and hips.  Each ankle has a ball joint to help balance the figure with or without a rider, and the stirrups in the removable saddle piece have a peg for the holes in Han's toes.  Paintwork in the horn is remarkable, and the eyes and face are generally fantastic.  The little horns and other elements all turned out great, as did his teeth and the interior of his mouth.  A little exposed pink skin on his arms is a nice touch, but by and large the figure is an unpainted furry beast.  His arm is capable of moving around too, making this figure more interesting than Jabba - and that's if you ignore the included Han Solo figure.  Hasbro did a magnificent job packing a lot of toy in a box for the price, and I'm super-excited to get the Wampa whenever that shows up.   I have no doubt Hasbro could do a better job at a much higher price, but given the toy inflation these days this is a pretty spectacular set given the price tag.  At $60, you'd probably have a good reason to gripe unless it featured a split belly or guts or some sort of action feature.   This toy has none of those things. 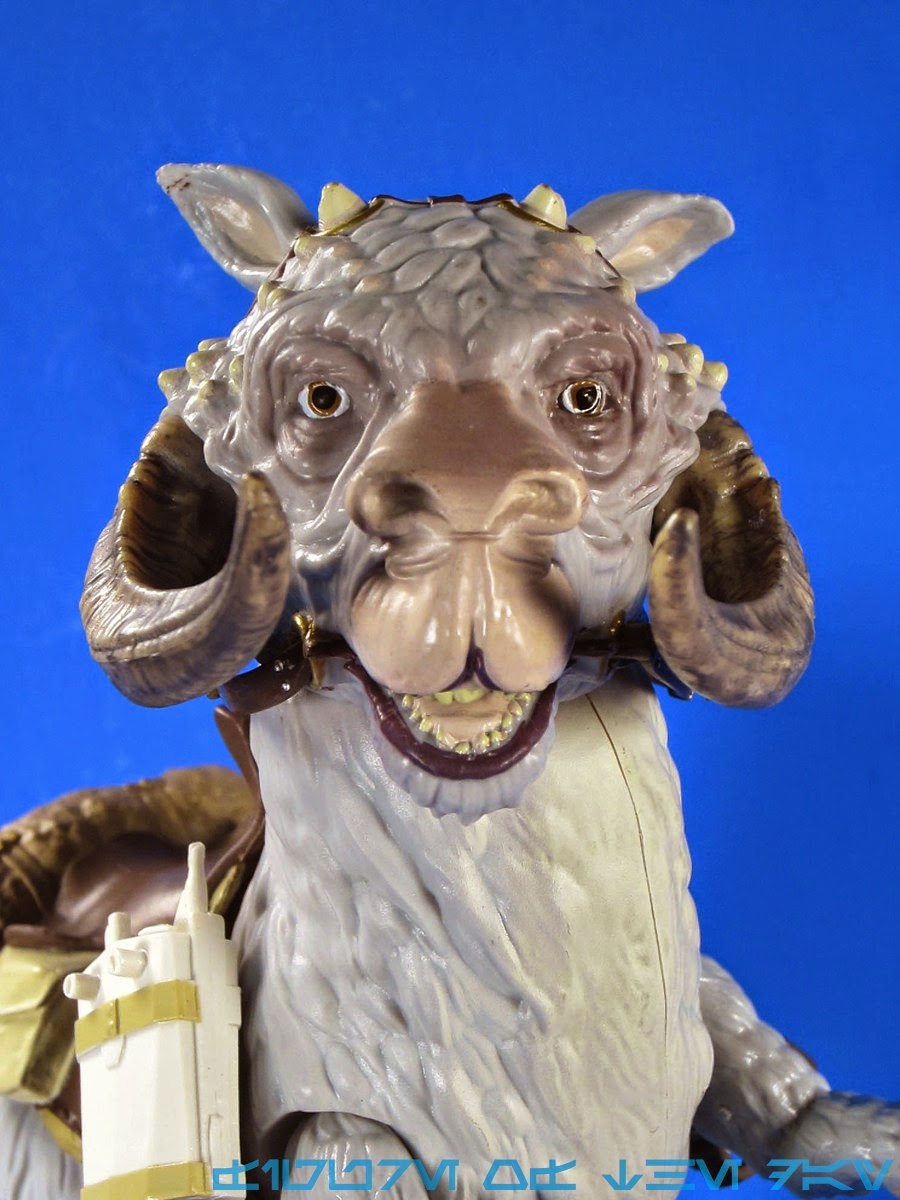 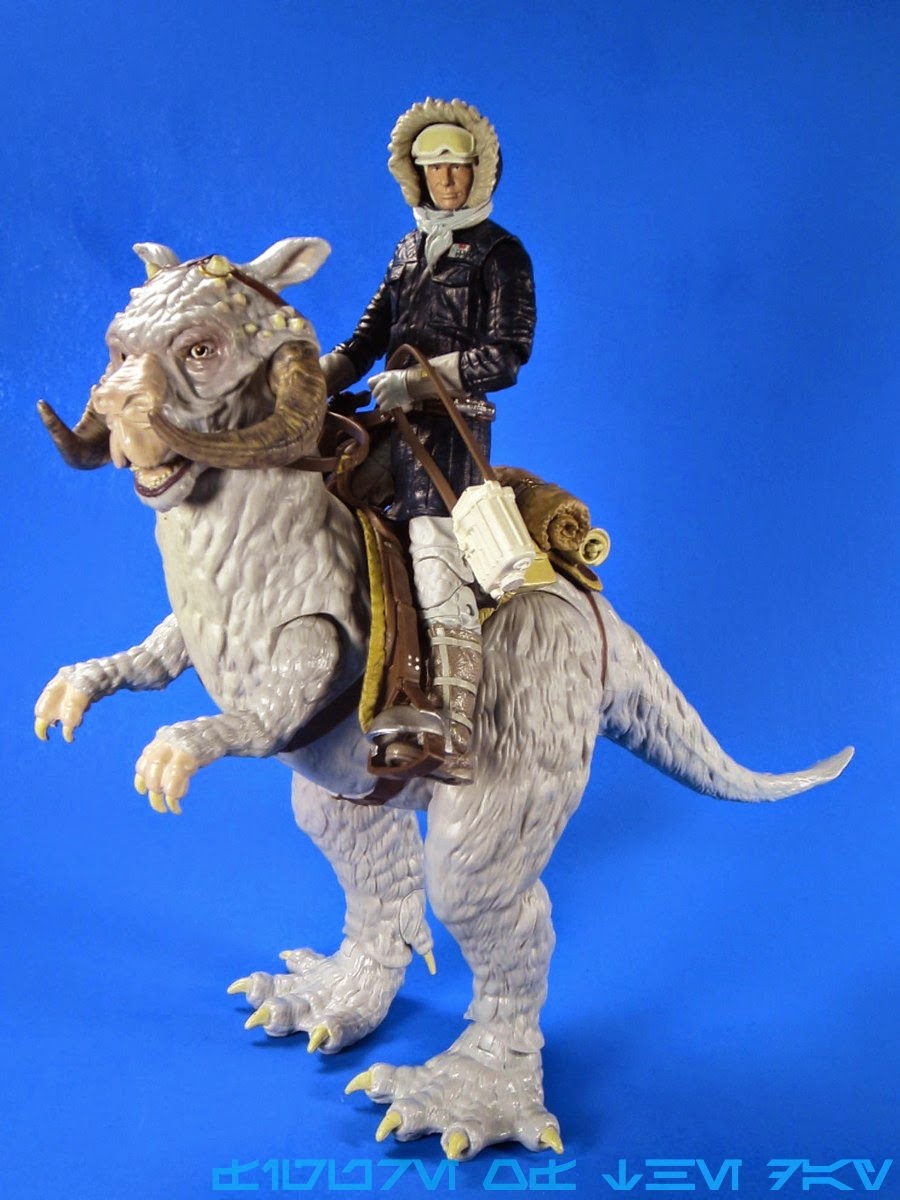 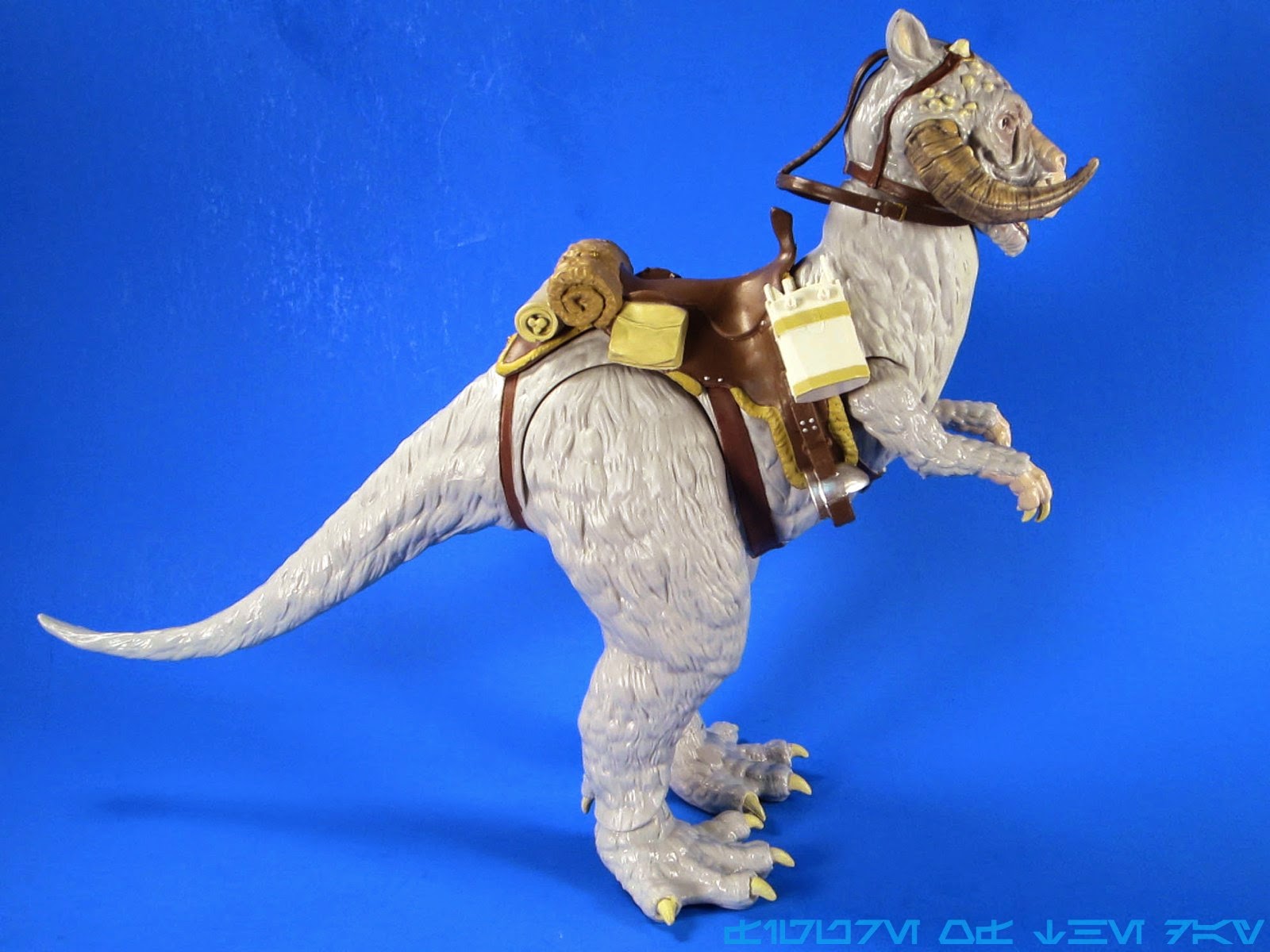 The good thing - or bad thing - is that this set sets a pretty good benchmark in competency.  The blaster isn't too small and breakable like the Biker Scout.  The set isn't an empty box of air like Jabba.   And best of all, it's not a set lacking in history - this pairing is a fantastic recreation of one of the weirdest, greatest scenes in the entire saga.  I hope Hasbro considers doing a few (very few) creatures and vehicles in this scale, like a Landspeeder or a Dewback.   This set proves that they can deliver something pretty special without jacking up the price too high, and given every other toy manufacturer in 2015 that's nothing to sneeze at. 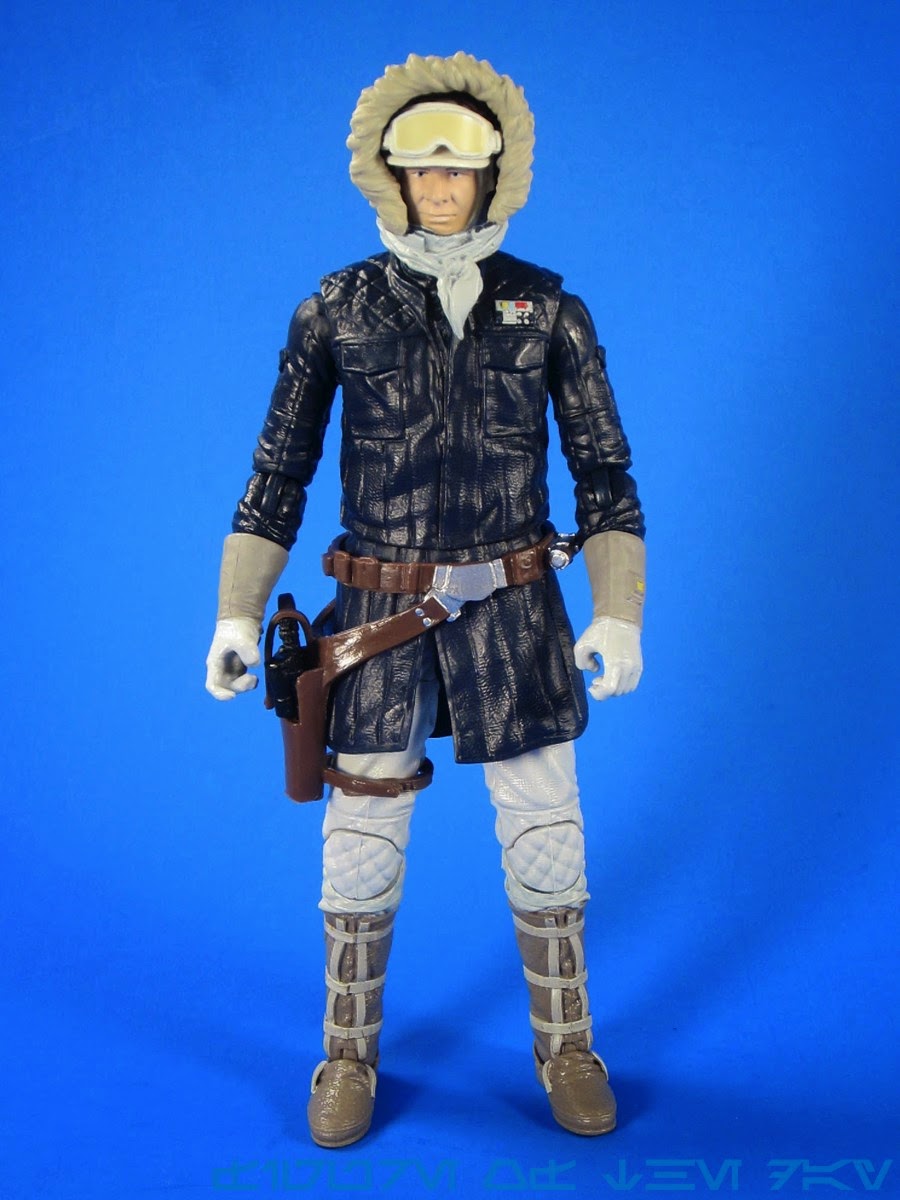 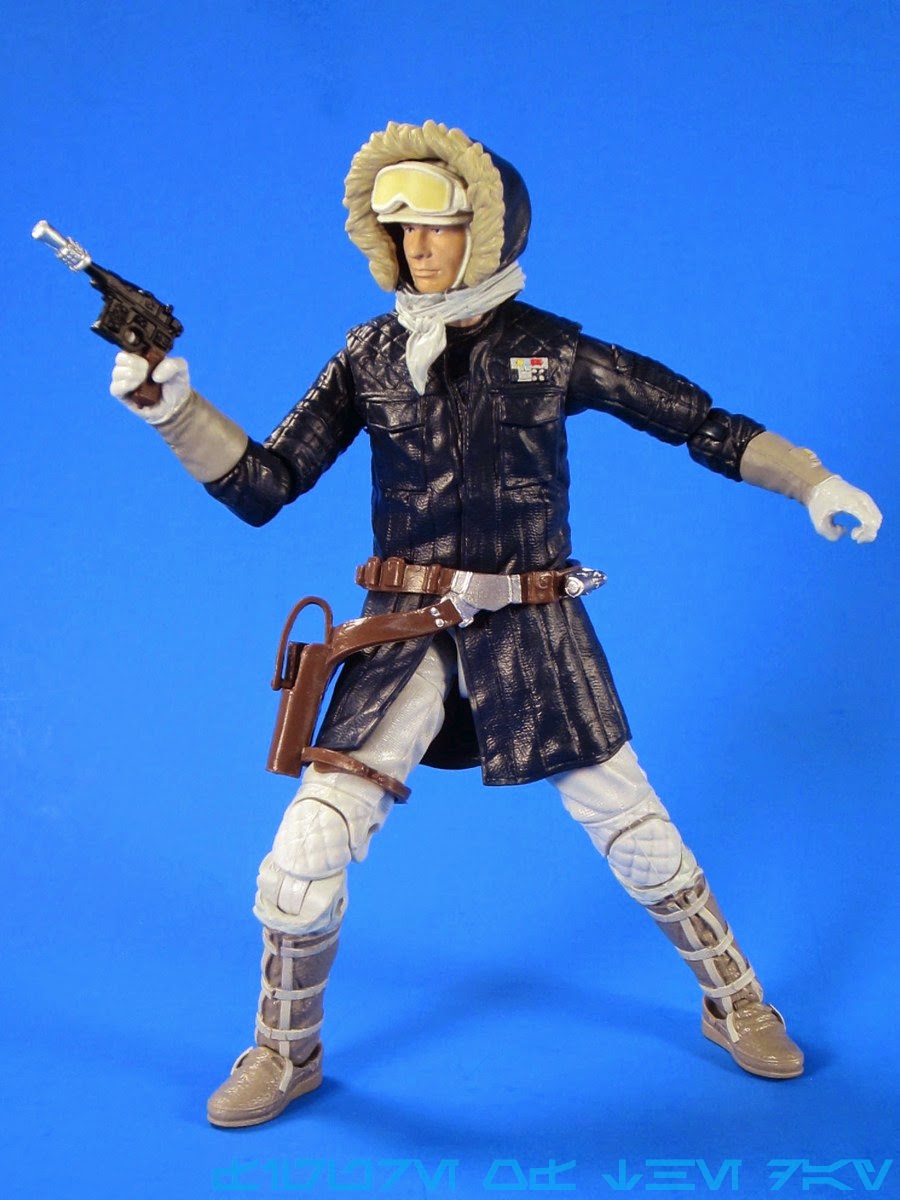 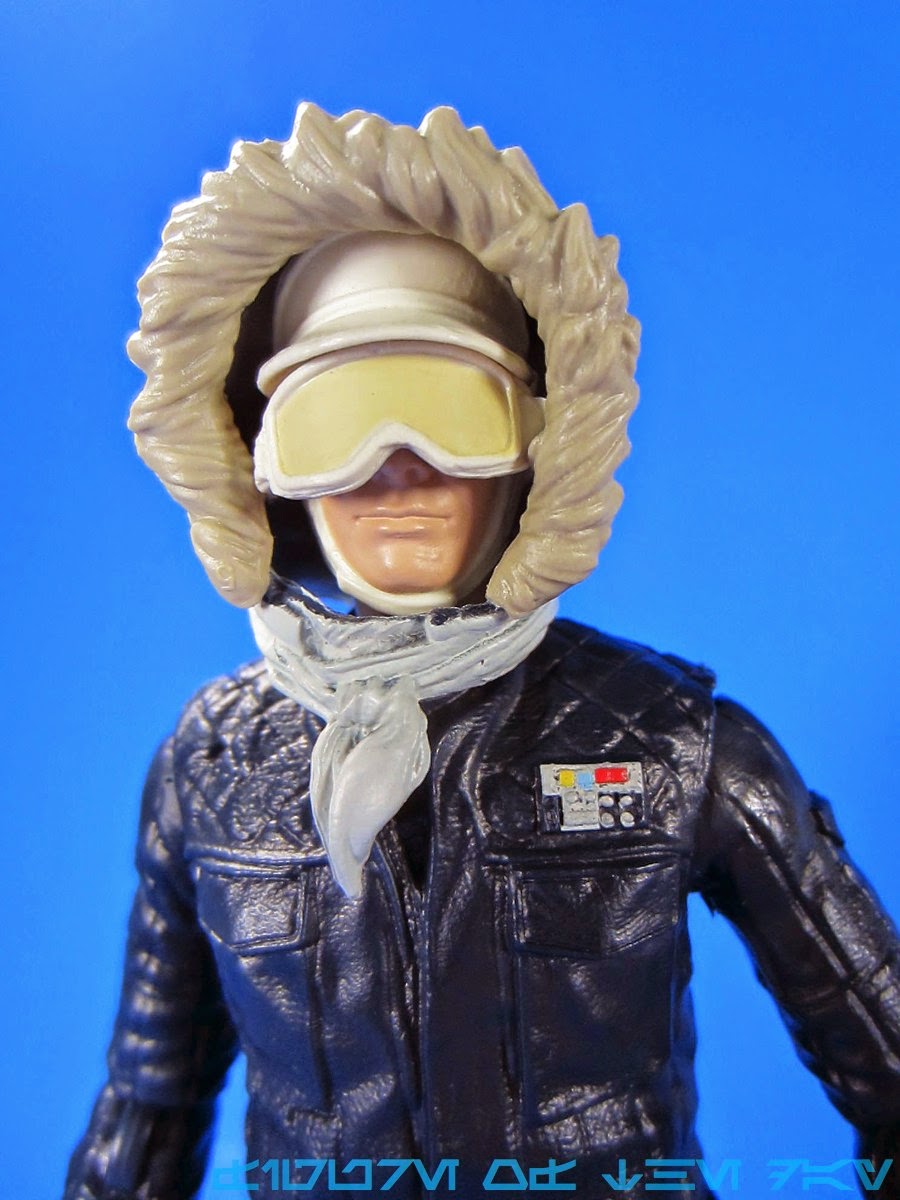 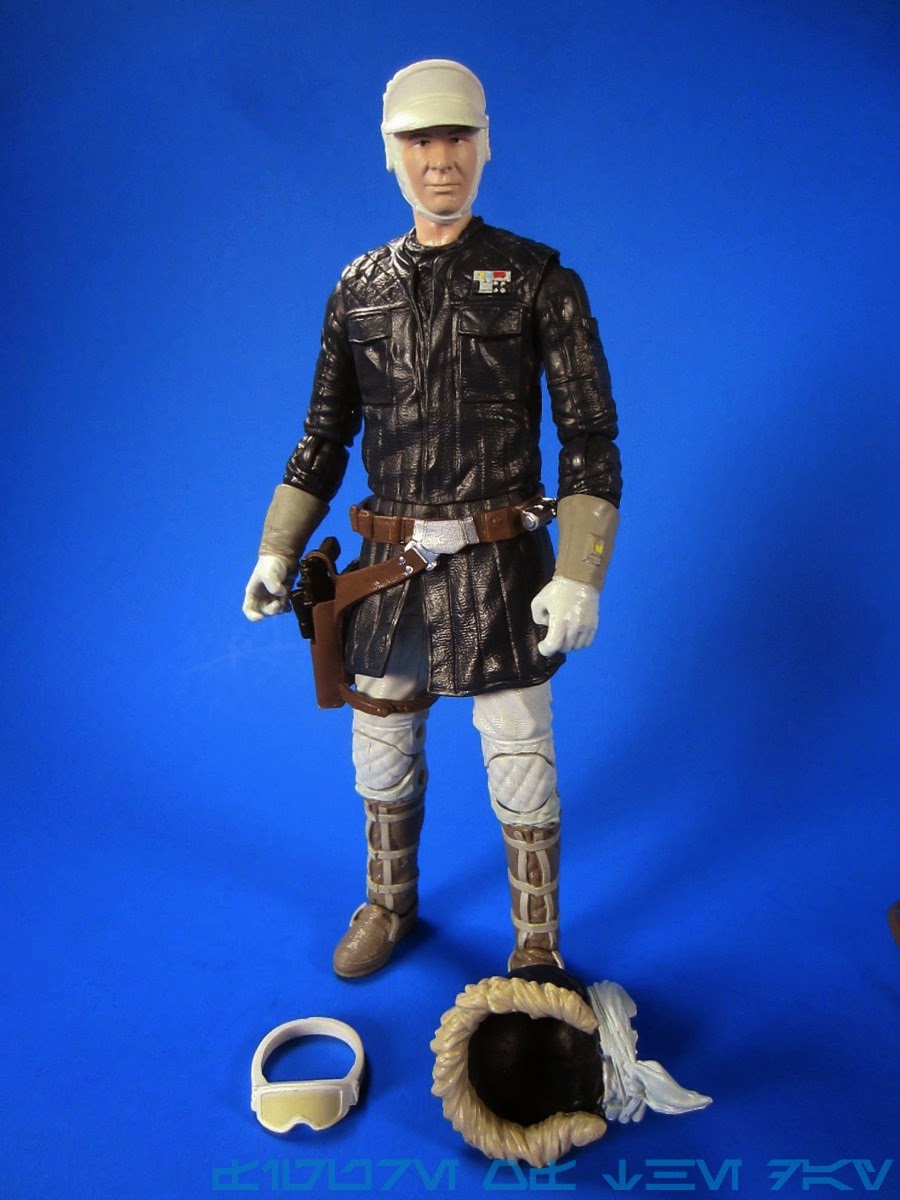 Collector's Notes: I got this from Entertainment Earth.  I have not yet heard of nor seen samples in the wild.

Not a bad set. I know some others really hate these guys and completely dismiss them simply because they are not getting 6 inch movie replicas for the price of $40. These are action figures (despite the "collector" tagline) and they are meant to be played with, and I believe they will suit that purpose just nicely.