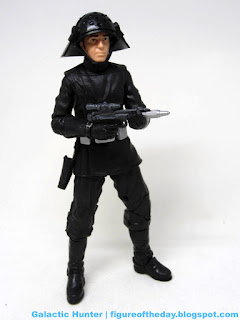 Bio: Death Star troopers were elite Imperial Navy troopers chosen by Grand Moff Wilhuff Tarkin for placement on the first Death Star.       (Stolen from Wookieepedia.)   Back in the late 1970s, Kenner changed the name from "Death Squad Commander" to "Star Destroyer Commander," and the name has been in flux ever since. 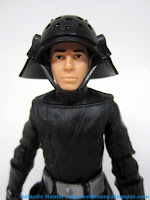 Commentary: I really like this Death Squad Commander figure because Hasbro made what comes in the box work - there's nothing disappointing here.  In and of itself, it's good - but it doesn't match the look of the man Derek Torrent on the cardback with a microphone or headphones, and it doesn't match the look of the original 1978 Kenner action figure of which this is ostensibly a update.   If you accept it at its own value, it's lovely.  If you wanted something else, this is not that.

Hasbro managed to make a good figure here.  It's not overwhelming like the Tusken Raider's many features - that one is a bizarre gem cut by an expert jeweler.  This is a perfectly nice figure that does nothing new, but does everything correctly.  The helmet slips on and off easily, with a full head of hair and a decent head sculpt under there.  The eyes are painted nicely, the sideburns are funky, and I have no idea if it was meant to represent a specific character, actor, or VIP within Lucasfilm/Hasbro/Disney.  Maybe it's Bob Iger's son-in-law, I have no idea - but it looks convincingly human and has a little personality  behind the eyes, and I like that.  His black costume with silver belt looks j ust like the other figures we've seen recently, and that's good.  It has a working holster, which is also good.  The bend-and-swivel hands are nice, as are the rocker ankles.  This is a figure that's far better than it needed to be, and I appreciate this. 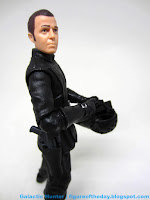 He has no problems holding his blaster in his gloved hands, which come complete with buckles.  The left arm has the Imperial cog on the shoulder, with glossy boots and gloves.  What really surprised me was how perfectly the joints were cut - the thigh swivels are just above the "skirt" line, so they're practically invisible.  We usually don't get that kind of foresight, so whoever did this one up must really love us and love toys.

As one of the Original 12, this figure has some undeserved weight associated with its history.   It's not one most fans would select as a favorite, but it's part of a group of the original cardback and that counts for a lot in the toy world.  This is a quality figure, but it's not as awesome as an alien or an armored trooper or a Twi'lek of some sort.  It's just solid.