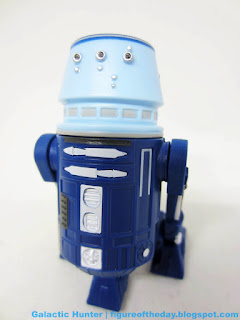 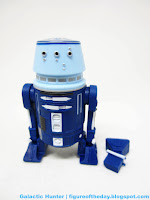 Commentary:  Another cool droid is R5-S9, a frosty, Mr. Freeze-like droid that I believe had a white dome on The Clone Wars.  The figure figure uses the existing Disney remold of the R5 parts, which debuted a few years ago.  The head has a hole in the middle for hat compatibility, dropping the antenna.  The legs are the revised single leg build, so neither has the wires on it.

I would argue R5-P8 doesn't match his animation model colors, and that this one definitely doesn't match - the back of the box has an illustration where the dome matches his panel colors, and they're super white.   The blue plastic seems to be a close match to the body in some shots, but not in others, so I'd say that was a success.  The black eyes and unique white panel placement seems to match quite nicely, so this is one of those droid designs that wouldn't necessarily mean Hasbro couldn't do a more accurate one later.  They won't, given how many droids we get these days, and I would say the top of the dome is also incorrect - the show has a silver stripe around the top, while the toy has a blue one.  On the bright side, this could be replaced with a new dome inserted in the Droid Factory bins some day were they so inclined. 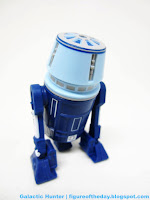 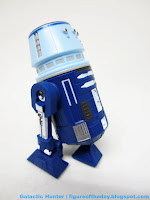 This is a wildly different droid, at least as R5s go.  I can't name another blue one, unless you customized it yourself.  Even though it's not really a good match for the show model, it's a good and different looking droid.  It's worthwhile, it's distinctive.  I'd say grab it because the four-pack is a good deal and three of the four are new enough that you should be very happy to have them, provided you like droids.  He's fun, he's colorful, we need more toys like that.


Collector's Notes: I got mine from Disney Hollywood Studios.