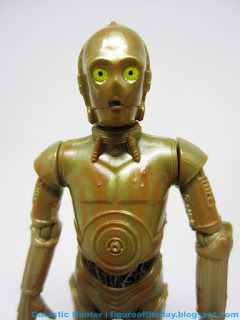 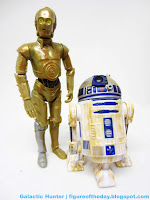 Commentary:  As part of a two-pack with R2-D2, See-Threepio (C-3PO) may be a required purchase - you can't get one without the other.  Based largely on the Hasbro Droid Factory tooling from 2009, this has been something fans were requesting for a while - just cast it in C-3PO colors and we'll buy it!  Well, that's what we said.  I assume we all did it, because here we are, and I did.   You may have bought this same basic figure tooling as U-3PO, K-3PO, or any protocol droid from Droid Factory  but C-3PO with dirt and a silver right leg only can be bought in this set.  So far.

C-3PO can  be split up at the neck, shoulders, and hips - he's also jointed at those spots plus the elbows, knees, ankles, and wrists.   You're not going to be overwhelmed by this one, but it turned out nicely.  The Disney people cast him in a decent dull gold color, minus the right leg which is now greyish silver.  What's particularly exciting is just how much dirt they added to him - at a glance, that silver leg looks almost golden!  He has no problems standing or posing like C-3PO, but the shoulders are rather dull and flat, but you do see all sorts of detail on the hands, arms, and the rest of the body.  In spots the dirt is extremely subtle, had they left it off you might not even notice.  It could be worse.  It could be green. 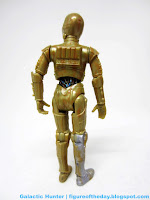 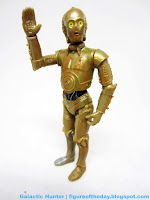 I like this C-3PO, mostly because this mold has never been C-3PO before.  The level of deco is good and the figure is sturdy and fun.  If you need a C-3PO - especially one with a matching R2-D2 - this is the set for you.   It won't change your life, but as the only 40th anniversary 3 3/4-inch C-3PO you may as well get it.  It would be my hope this set stays in distribution for some time, just so kids can get one if/when Hasbro decides to not sell them again for a year or three.