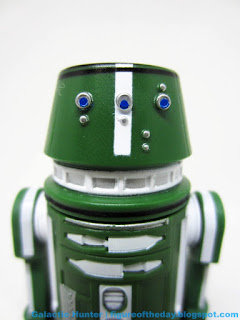 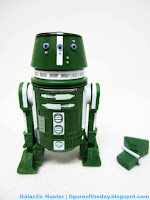 Commentary:  I must confess I did not immediately recognize R5-013, also called R5-U8, also called "Who?"   He was in the first season of the show as part of Shadow Squadron, so he's less of a recognizable presence as something that looks cool and should be purchased on that merit.  Like the other R5s in the set, he's based on the revised astromech parts from the Droid Factory bins with a lot of white and green.  I'd like to say I'm impressed with how white the white looks - sometimes it's not thick enough, so here it's super bright.  Nicely done. 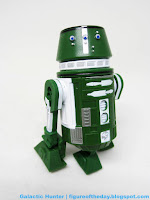 The figure has a dark green plastic base, whereas the animation model seems slightly lighter.  The eyes are still  blue, though, which means you can sell it for higher prices on the black market.  The white paint is clean and evenly applied, while the blue eye dots on my sample are a  hair south of where they should be.   The white stripes run all up and down the figure, with four on the dome, two on the armpits, and one on the back too.  Other markings also help it pop a little bit, which is handy as it's dark in here and this gives him some life.  All the joints work just fine, and you can take him apart just like his peers.

Of the set, I would argue this is the least of a stand-out.  It's executed well, it looks nice, but it's not as frosty as the blue one, as drunk as the bartender, or as weaponized as the pirate droid.   It's nice enough, and a neat diorama addition but I can't assume anyone out there was crossing their fingers for this specific droid.  I'm still happy with it, though, because anything that's different is largely welcome. 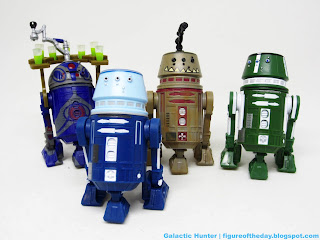