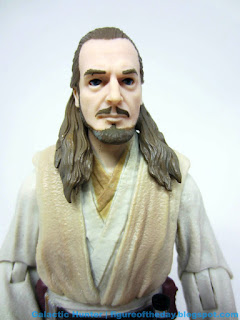 Bio:  A venerable if maverick Jedi Master, Qui-Gon Jinn was a student of the living Force. Qui-Gon lived for the moment, espousing a philosophy of "feel, don't think -- use your instincts.” (Taken from the figure's packaging.) 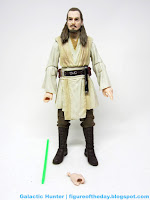 Commentary:  No movie got flushed down the crapper faster than The Phantom Menace.  After its 1999 debut, Hasbro couldn't get away from it fast enough - by 2000, the line had rebranded and new characters from the first prequel were generally scarce.  This Qui-Gon Jinn is only the second figure from the film to enter the 6-inch action figure assortments, the first of which was in 2013.   While some fans request characters from Episode I, they are neither legion nor loud.   With a new movie every year I assume that one every three years is probably a good clip, as I don't expect much other than maybe some day getting Obi-Wan Kenobi or when it costs out, Jar Jar Binks as a convention exclusive. 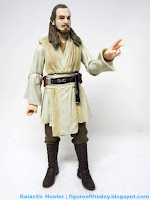 This is a good figure - I'd go as far as to say an essential one for a collection.  I'd personally want a few figures from each movie, and The Phantom Menace offers few options.  It wouldn't surprise me to see him in a two-pack with Darth Maul as a retailer exclusive in the near future (I swear I have no advance knowledge of this if it shows up), and it's nice enough to warrant a purchase.  If you see it for retail price, get it.  At a slight mark-up, it's still good enough that you might want to consider getting it anyway.  You'll want to buy a robe for it, but aside from that Hasbro delivered all killer no filler here. 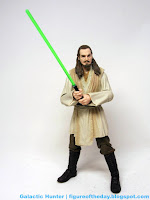 Qui-Gon appeared in an assortment with intricate figures and a lot of plastic.  Also some figures lacking in "oomph."   He's probably the weakest new guy in the batch - the Royal Guard has robes.  The Tusken Raider is one of the most ornate figures in the line, with tons of gear.  Lando has a big cape and a couple of accessories.  Qui-Gon is present with a lightsaber and an alternate hand - no cloak, no robes.   I assume this is purely to keep costs of the entire wave down, but it felt like it was missing with Obi-Wan Kenobi, and doubly so here since Qui-Gon frequently had some bonus garment over this outfit.   It's still a good figure, and the hands swap out easily, but I assume all this is doing is creating a market for Etsy stores and people who can sew 1:12 scale clothing.   The lightsaber plugs in his belt nicely, and the removable blade plugs in without a fight.   The Jedi gesture hand is a nice bonus and adds something to fight poses.

This is a figure with a swell sculpt - the head looks great, if a little pale.  The eyes are painted nicely and seemingly cast separate from the rest of the head, which in no doubt would add to the cost of the figure.  The beard and mustache look about as real as their movie counterparts, plus his hair is slightly flexible - so you can move his head a little bit.  Articulation is standard The Black Series fare, with a range of motion that's acceptable.  He can get both hands on his lightsaber, but it doesn't look a heck of a lot better than the 1999 Jedi Duel release.  If he has one or no hands on the lightsaber, he looks a lot better - the Jedi gesture, holding the lightsaber out, it's a lot more expressive.

Deco is superior to other Hasbro Qui-Gon toys, with parts of the robes painted in colors we usually don't see.  The outer level is a bit darker, and an inner garment is even darker than that.  The pants are fine, the boots are cool, and the textures are top-notch.  I love how they got his face to not be glossy, although it is a little pale.  I'm happy with the likeness overall, although if you get the facial hair and nose right you're halfway there.