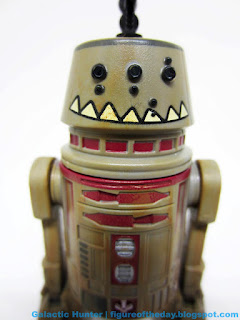 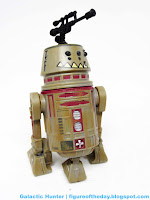 Commentary:  I'm thrilled someone got to make R5-P8, because the design from the cartoon was a brilliant idea.   Pirates painted a toothy grin on a droid dome, and slapped a gun on its head.  Awesome!  What's less awesome is the colors don't quite match - or rather, they do.  The animation model has a different colored body than it does a dome, so the all-brown "realistic" figure isn't the match I would hope it would have been.   I still love it. 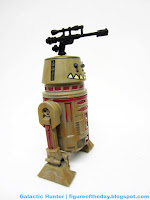 The revised face gives him just so much personality, and this is the kind of thing I wish we could see in greater numbers.  This is basically an urban vinyl artist figure, on a TV show, made as an action figure.  The gun on his dome reminds me of the "phantom toys of 1986," where Hasbro bashed up some war droid figures that never saw release.  The gun fits in the hat hole on his head, making use of the opportunities the format affords the toy.  The thing that amazes me is they have this brown figure and the manufacturers slapped dirt deco on it.  Can you tell?  Maybe, maybe not.  The figure is basically medium grey, but the dirt makes it look brown.  Why? I have no idea - I didn't even realize that it was grey at first.  From the back the figure has even more boxes and panels painted, showing Disney went the extra mile for some reason I don't understand.  Kudos to them for not taking shortcuts. 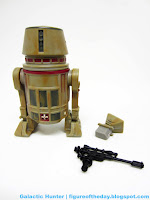 It's rare that I see a new deco Astromech figure where I can honestly point at it and say "this is wildly different."   Disney was lucky enough that they got the ability to give themselves this one, I bet it would have done great just about anywhere.  You don't see Astromechs with guns or teeth every day, so go ahead and get this one.   If you can get the set for about the $30 retail price, you simply must do so.