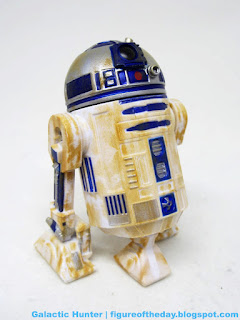 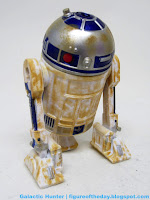 Commentary:  While Chopper broke new ground and gave us something that serves as a high benchmark for the format, Artoo-Deetoo (R2-D2) meets expectations.  This is the same "wireless" version of the mold since the second phase of the Droid Factory, with the same mold being used for the right and left legs plus a dome with a hole in it - so you can use a hat.  (Sold separately.)

R2-D2 has 5 points of articulation and is a fairly sturdy little fellow.  Deco is more or less standard issue R2-D2 with a fairly intense printing of desert sands on his body.  The color is hard to get right, as you've no doubt seen on many other Hasbro R2-D2 figures over the years.   They did a good job printing on the deco cleanly, but it also looks like it might be, uh, smeared... let's go with chocolate.  The dome deco is great, but the dirt body seems a little exaggerated - especially compared to the photo of the prop shown on the back of the packaging.  The result is on the happy side of decent, but you might actually be happy with your existing R2-D2 toys. The lack of foot wires may make this one less than fully definitive, but at least it's an R2-D2 in a set at a price you can probably swing.

I'd say this one is for completists only, just because you do doubt have an R2-D2, or perhaps 40something flavors of him.   This is another one - and you may  have bought the same basic configuration sans dirt in the Droid Factory parts bins.  I love the packaging, the set is a good one, but it's still just another R2-D2 using existing tooling.