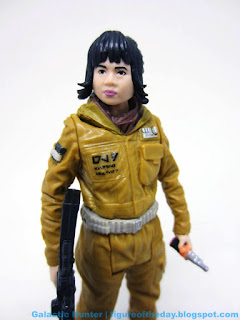 Bio: Rose Tico was a female human who served in the Resistance as a maintenance worker during their conflict with the First Order, whom Tico had hated since she was a child. Tico's sister, Paige, was a gunner in the Resistance.   (Stolen from Wookieepedia.  Packaging has no bio.) 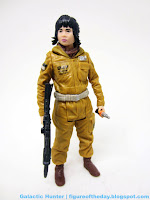 Commentary:  I saw Resistance Tech Rose at Walmart prior to "Force Friday," along with Finn and C-3PO just sitting there for a few days while other figures came and went.  "Uh oh," I thought, "Unless she's the new Rey we're in trouble.   Rose started to move after the movie came out, but she was not popular prior to its release.   As a space mechanic, she gives life to part of the Resistance we don't see much.   The character is a good one, the actress was a delight, and the figure is perfectly fine.   I wish Hasbro didn't release a super-articulated version of the same costume at the same time - and then rerelease this figure in a 4-pack at Kohl's - and then include the same figure in a subsequent wave yet again - but that's what planning can get you.   Much like Rey, there's a lot of the character in basically the same costume one too many times.   It's a good figure, but what we got was overkill.

Mercifully, it's a good figure.   The eye paint is sharp, the hair sculpt is good, and the printing on her speed suit is fantastic.  I'm not sure why they opted to mold her mustard-colored hood as a separate piece of painted plastic, but it's not much of an eyesore.  Her cargo paints have painted bits, her various greeblies are decorated nicely, and the belt can hold her taser weapon.  Mostly.  It's not a perfect fit, but you can wedge the tab in there.   They could've done a better job here.   She has no problem holding her rifle or her taser in her hands, nor does she have problems standing or sitting.  Other than the belt/tab compatibility issue, Hasbro did a solid job here. 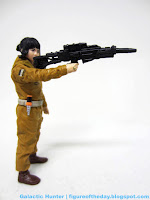 The outfit has a lot of decent details, including her secret society ring from the film.  That's a nice touch.

Can you believe we live in an era where my complaint is that Hasbro made a perfectly good figure and made enough of it to go around in multiple channels and in multiple styles?  I feel ridiculous.   I enjoyed watching Finn and Rose be idiots and get thrown in prison for a parking ticket in Space Vegas.  They're charming, underqualified special agents on an adventure that's beyond their pay grade that makes a bad situation worse - yet they're charming and I am glad they didn't die.   I'd be curious to see her on a live-action TV show, and at least so far it looks like we aren't going to see seas of unsold Rose figures.   If you don't have a Rose, this is a good one - the super-articulated one is better and has more painted details, but this one is cheap and very good.  Get what makes sense for your budget and availability.

Force Link Notes: "Blast them!" "Bullseye!" "I can fix anything!" "We have a mission to complete." "You can’t give up on the Resistance."

It's nice that their basic line figures have had a huge leap in quality over TFA figures, but it's a shame they can't find a balance between lower cost and some better articulation (elbows & wrists should be a given on all figures that come with a weapon).

What? The Force Link Notes don't say "It's not about killing what we hate but saving what we love"?? What a travesty!