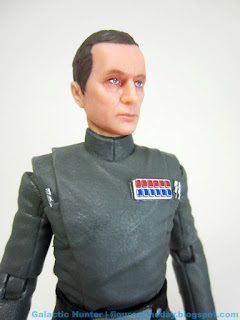 Bio: An ambitious Imperial officer, Piett rose through the ranks to captain and was assigned to the Super Star Destroyer Executor, Darth Vader's flagship.  When Vader strangled Admiral Ozzel, Piett was granted a battlefield promotion to admiral - and given a grisly warning of the penalty for failure.  (Taken from the figure's packaging.) 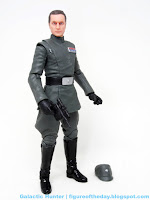 Commentary: Hasbro's character selection for The Black Series has been rather fascinating, light on aliens and droids but heavy on  humans.  Since there's a lot of tooling to share with Thrawn and Tarkin, Admiral Piett exists.  The arms and legs and lower jacket are similar to Tarkin, with a new cap, new head, and new hands.  And a new blaster.

The 6-inch figure is on par with previous efforts - you get a stiff jacket, so sitting isn't much of an option. The figure has a good range of articulation, much of which is nicely stowed in the seams.  Bend-and-swivel wrists allow you to give him a weapon, which he doesn't use, which is kind of a shame as it's new tooling and I'd just as soon have a slug figure of a Mouse Droid or some other armament for another figure in my collection.  (Or, heaven forbid, a build-a-figure piece.)   The texture throughout is great, and I can see how and indeed why Hasbro wants to make the most out of its figures like this - why not give the older fan the fascist thugs we crave?   The grey-suited toady has a removable cap and a clean outfit complete with black gloves.  The face looks good, with an excellent sculpt and printed, mostly glossy features.   There are bags under his eyes and a little bit of color in there, perhaps too much - I feel like we're looking at the first phase of a new manufacturing technique which is going to get a lot better as time goes on. 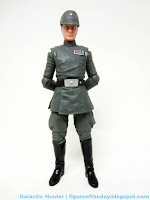 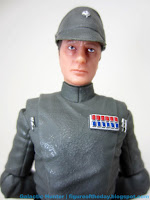 This figure exists to look good boxed or stand on a shelf with your bounty hunters and/or Imperials.  There's not a lot of fun action to have, and while the blaster is appreciated, it's of little use.   It is a fan-requested character, and seeing things like this gives me hope for the line's longevity.  We haven't even gotten the second Cantina alien yet, but we're on Imperial Dude #3.   Things are moving along at a strange clip - Hasbro has put out more Expanded Universe and non-vintage Original Trilogy figures than I might have expected 5 years in to the line.   I hope they keep dropping fun little surprises like Piett out there, and if we get a Ponda Baba, Momaw Nadon, or Snaggletooth, that'd be swell.  (Red for main line, blue for the interwebs.  Do it Hasbro.)

Email ThisBlogThis!Share to TwitterShare to FacebookShare to Pinterest
Labels: Empire, Exclusive, Return of the Jedi, The Black Series 6-Inch, The Empire Strikes Back

Who was the first cantinas alien guy? Lol. I can't remember.