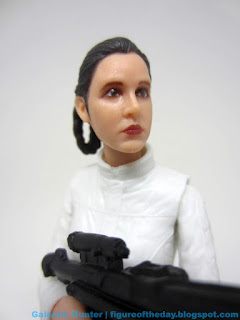 Bio: Princess Leia Organa was one of the Rebel Alliance's greatest leaders, fearless on the battlefield and dedicated to ending the tyranny of the Empire. Daughter of Padmé Amidala and Anakin Skywalker, sister of Luke Skywalker, and with a soft spot for scoundrels, Leia ranks among the galaxy's great heroes. (Taken from the figure's packaging.) 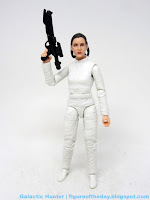 Commentary: I believe Princess Leia (Bespin Escape) is the best Carrie Fisher that Hasbro has ever given us.  This is the first time Hasbro's "Ultra Real" face printing has been done with Ms. Organa, so when you have a good sculpt finally given good paint it's almost eerie how good it is.  It's not the insane level of detail you get at Hot Toys, but it's also not $200.

The figure is light on deco, but so is the original costume.  The body is a white suit, largely devoid of color.  It's also basically the Hoth outfit sans vest.  The blaster is undecorated, and other Imperial blasters have gotten a little detail as of late.  I assume this is why the cost is still $20 - the face has a pretty stellar make-up job with the Bespin hair loops, red lips, and a lot of shading around the face that really brings her to life.   After seeing this figure, I want them to go back and do the other versions - particularly Jabba's Prisoner - to see if we might get something significantly better out of it. 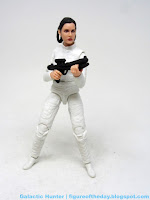 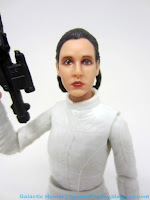 Leia's articulation is par for the current course.  You get rocker ankles, double-jointed knees, and those slightly better-cut elbows so she can bend her arms a lot more than the typical 90 degrees.  I like how you can get some good action poses here, blasting away with both hands.   There's really no getting away from the fact that the figure is a star, another high mark for Hasbro after a couple of years of perfectly nice but hardly impressive releases.  On the Marvel front it seems the likeness on Paul Rudd gets the high marks, but I would wager that this Leia figure is their best human head in all of Star Wars.  Having done thousands of very good figures, Hasbro has to do a lot to make a figure so good it stands out over the previous releases.   Good job, everybody - I can't wait to see what your "real life" X-Wing Luke will look like next year!