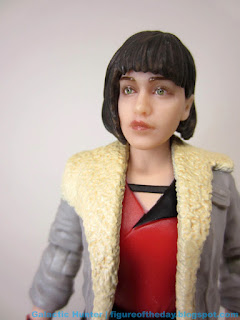 Bio: At 18 years of age, young Qi'Ra is already enmeshed in a life of crime, working for a gang on Corellia.  (Taken from the figure's packaging.) 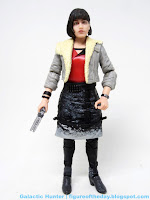 Commentary: I like this Qi'Ra figure, and it makes me grouchy because she doesn't have a lot of pals.   It's proficient, a superior example of a figure well-executed with all the trappings you can hope for on a 6-inch scale plastic figure with a level of detail consistent with the best of your expectations from an unreleased but troubled movie.  What I hate is that she's alone - Lucasfilm gave Hasbro reference for a Qi'Ra minus the corresponding time period of Han.  Non-collectors will shrug, but generally speaking I don't want to display a figure with no contemporaries - Forces of Destiny is mostly like this.  Disparate figures from disparate time periods, lacking the coherent focus of most Kenner-era waves giving us at least a couple of buddies to hang out together.   Granted, Qi'Ra doesn't have many friends because her pals aren't figures yet other than Han Solo.  And he's in the wrong costume.  Harrumph.  (Perhaps a Han's Speeder was planned that never made it out - I don't know.)

If you can get beyond the loner nature of this one - she's great.  Hasbro, pat yourselves on the back. Or Gentle Giant, or the sculptors inside Anaheim's Empire of the Mouse.  This figure looks great, with various textures coming to life in plastic.  Her collar looks sort of like wool. Her skirt is dirty leather, and her boots more or less match - complete with dusting of grit, or worm skin, or something. The bracelets mask the wrist joints, and are painted quite nicely.  The ab joint is well-hidden, with no weird crunch or bizarre cut breaking up the clean lines of the shirt meeting the skirt.   I love the wrinkled jacket, the dynamite hair, and the glossy eyes and lips - the shine doesn't look as good on the eyebrows.  (Hasbro: stop doing that.)

With about 26 points of articulation, this is a wonderful showing of how to hide articulation in a costume.  She has a tremendous range of movement, and looks fantastic too - I love the black, white, and red all over costume with superior posture and body language thanks to the jointing.  She can also hold her spiffy blaster with no problems.

Collectors have shunned many of the women in the new movie era, possibly in part thanks to their being produced in a lot of waves - so we're seeing top-billed women figures drop in price pretty quickly.  This is pretty backward from how things used to be - Leias came out, were in short supply, we got cranky, repeat.  At least each movie gets us one (or more) new women, as opposed to the Smurfette-flavored original casting.   I like this figure a bunch - thankfully Moloch is coming to join her in the prologue, I'd love to see Vest Han and maybe the Imperial officers Drawd Munbrin or Falthina Sharest.  (Seriously what is up with these names?)