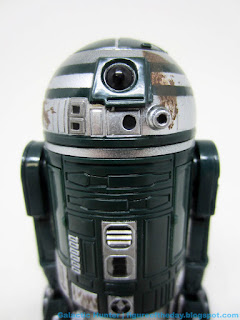 Bio: Astromech droids are a series of versatile utility robots generally used for the maintenance and repair of starships and related technology.  R2-X2 was Red 10 Theron Nett's droid and served in the Battle of Yavin. (Taken from the figure's packaging.) 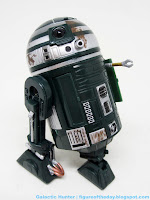 Commentary: I wanted to say R2-X2 is the best version of the droid yet, but it's not.  It's close, but I'm having issues with weird, new errors being introduced to these droids.  R5-D8 is largely excusable because there's no good reference and previous figures were based, in part, on imagination.   R2-X2 is a droid done multiple times since 2006, and each version has had errors - some of which are easily overlooked.  This one got the green part right, got the color right for the body, and got the box around the "mouth" dot unpainted - correctly!   That's great.  It also totally missed the color of the dome, which is a kind of a big deal.   Kotobukiya got it right on all fronts last year.

In the movie, R2-X2 has a dirty white dome.  This 6-inch scale toy has a silver dome, which I don't believe it's ever done before.  LEGO got it right.  Funko got it right.  It's right on the cards.  Even the black R2-X2 Hasbro did got this part right.   It seemed that, to date, the one thing consistent in every single R2-X2 figure, LEGO set, or bobble head was the white dome.  But no, in 2018 Hasbro, Lucasfilm, and/or Disney found a new glitch to introduce to the low-hanging-fruit that is a droid repaint. 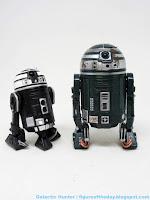 It's a fine looking robot in and of itself, but it's not a robot that appeared in the movie.  It's not even an understandable goof either - the black R2-X2 did indeed look black in some reference shots, and some droids we know only as a dome, so the body is easy to make up.  But not R2-X2.  We've seen mistakes, and we've learned from so many of them.  Props to Hasbro for getting the general panel layout and stripes correct, but I cringe at paying $60 for 3 de-accessorized droids where one of them definitely has a glaring error and another probably has several glaring errors.  I hope against hope that Lucasfilm approvals starts requiring anyone approving figural products to, at the very least, compare the new item being approved to previous releases and to find a still from the movie.  Or, in my dreams, show it off to fans if you're making a toy based on a 4 decade old movie - let us chime in.  Feel free to ignore us, but when something is totally wrong it would be nice to have the opportunity to correct it when we're talking about an exclusive in a line that's generally pitched as being specifically for the adult collector that wanted a clean, fresh start from 3 3/4-inch.  This is amateur hour error stuff.   Yes, the dirt splats are wonderful - but i don't see those in the reference material, either.  Is it possible that this figure isn't meant to represent R2-X2 but some other, similar robot they found in the archives and made by accident? I hope so. Because then I can understand why this figure doesn't match anything we've seen from 41 years of stills and movie history.