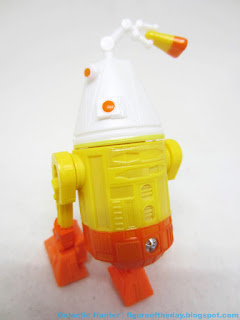 Bio: All different types of Astromech droids populate the Star Wars galaxy.  Each droid is different and has their own unique personality and colors.  This droid is dedicated to serving the residents on the mining colony of Cloud City.  May the Force be with you... and your Droids!  (Taken from the figure's packaging.) 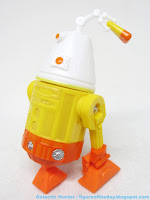 Commentary: I bristle at new Disney droid bins, but I'm more or less at peace with the carded droids.  R4-B0018 is this year's offering, and you can score it on eBay or Amazon for less than retail price plus tax plus parking right now.  I realize it's still $20 or so for a $13 droid that should be $10 or under, but that's life, plus I want it and I'm not going across state lines to get one.

The coloring is inspired by the color of candy corn, a popular-among-adults Halloween candy to  hand out to children.  The real candy is usually white at its narrowest, orange in the middle, and yellow (like real corn) at the widest point - Disney switched the colors for some reason.  Perhaps it's trademarked - that yellow cap is meant to evoke real corn, though, so it doesn't look quite right in its current form.  It does get the point across.  The same R4 mold has been used for countless figures, but it adds a new articulated claw arm to grip an incorrectly colored piece of candy from the dome - perhaps we will see it used in a future droid elsewhere.  It fits in the dome quite perfectly, and there are little grooves in the corn that fit the claw.  It's pretty perfect, but the joints on the arm pop apart easily. 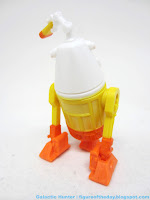 The coloring is worth mentioning, because it looks cheap and isn't.  The white dome has sculpted detail that is difficult to see in a dark room, and each colored section has a surprise - metallic panels.     The yellow plastic has sparkly metal paint in certain panels, as does the orange.  Why?  I have no idea - it matches closely and may be difficult to register in spots.    I appreciate the effort, but as a person who has been involved in toy making I would not fault them for cutting it and making an extra couple of pennies per figure.  It doesn't improve the figure, nor does it take anything away if it had been missing.  It's still evocative of the autumnal treat that more and more people express distaste for as an adult.

I like it - but I'm fond of these holiday droids.  Last year's is a favorite, and we'll get to it next week.  For this year, you should score this one while it's still on the cheap side.  It's my hope they keep these weird holiday droids gong and never, ever do more build-a-droid bin pieces, as these are much easier to obtain as a non-resident of a park in Disney's orbit.   Perhaps a Jack-O-Lantern, a skeleton deco, or a "black cat" droid could be in the works! I hope so.  The Christmas droids have been increasingly esoteric, and it's a little surprising they aren't doing any modeled after Easter eggs yet.  For now, I'll enjoy this candy-inspired can of robot.