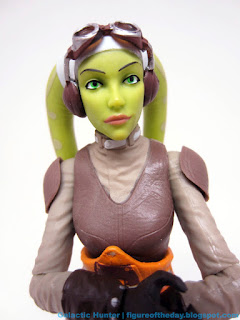 Bio: The captain and heart of the Ghost's rebel crew, Hera Syndulla was a gifted pilot and leader. Her command of her crew and the respect she earned from the Phoenix Squadron prompted her promotion to squadron leader by Commander Sato.  (Taken from the figure's packaging.) 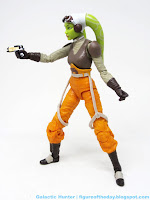 Commentary: Thanks to a reasonably popular show, Hera Syndulla sold pretty well as a launch figure from The Last Jedi's bow.   It's easy to forget, but collector lines are generally powered by fan nostalgia - and by 2017, fans had a pretty good opinion on Hera.  Some people didn't care for her show, but people that watched the show like Hera. She has fans and the previous figure sold well, so it's no surprise this one moved.  Sabine and Kanan and Ahsoka did fine, too - clearly there's something to be said for making TV figures.

She's good - this is an interesting figure.  27 points of articulation give her a good range of motion, giving us the best and I assume only green Twi'lek we'll ever get.  The skin color is great, and if you thought "Wow I bet they could make a nice Oola!" I'd agree with you. They'll never do it - but it would be perfect.  At least Hera has a fantastic and slightly snarky facial expression, and a decent range of movement with some flexibility in her straps.  The grey circles on her lekku are subtle, and the deco is almost perfect.  Almost. The one nitpick I have is that the upper area of her pants is painted orange as it was molded in grey plastic, and the orange does not at all match the pants plastic.   If it matched, I'd say this is one of their finest efforts.  Instead it's merely pretty great. 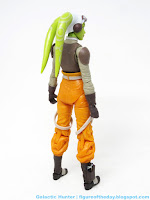 I'm happy Hera exists and surprised that the whole team is slowly being revealed in this scale, even though the line is moving forward.  A complete season one cast is still more or less promised by Hasbro, who all but confirmed Zeb after showing us Ezra and Chopper at Comic-Con.   It feels late, but at least they're coming after we've decided how we feel about the crew and not before the show aired.  Hasbro did a great job executing most of Hera, so get one if you see one at a price you can tolerate.  She can't sit well, but it's not like she's going to get a vehicle.