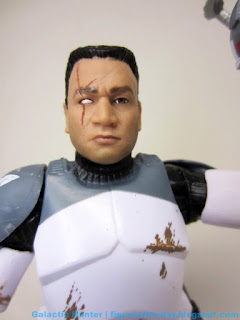 Bio: Clone Commander Wolffe (clone designation CC-3636) served in the Clone Wars as commander of the tight-knit unit known as the Wolfpack. A seasoned and battered combatant, Wolffe has witnessed some of the worst the war has to offer. Despite tragedy, he fights on bravely, proudly brandishing his battle scars and instilling loyalty among his men.  (Taken from the figure's packaging.) 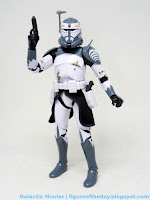 Commentary: It's sort of a miracle that Clone Commander Wolffe exists, but it makes sense for Hasbro as The Clone Wars has some fan legs and Wolffe is Rex with new paint, a new helmet, and a new head.   The body itself was originally sold as the Attack of the Clones Clone Trooper, so you might have a half dozen or so figures with this body.  Hasbro designed this one when double-jointed elbows were still on the table, we've had very few of those as of late.

The figure has slightly dirty armor, which is kind of odd.   The boots are glossy grey, but there are occasional smudges of fudge on the chest, arms, and helmet with flecks of white baked in some grey bits.   Plo Koon's Clone General is good, but it's hard to reconcile the shiny parts with the dirty parts.   I'd love to see the grey be all matte or all glossy, as the shoulders and helmet aren't quite as lustrous as the hands and lower legs.   At least everything looks like it should - you get the wolf detail on the helmet and shoulders, and it looks good from a distance. 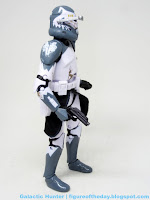 The figure's best feature is hidden under a helmet - the portrait looks like a scarred and enhanced Temuera Morrison.  The skin tone isn't perfect - Hasbro has had issues getting it just-so, and at this size it's probably impossible to exaggerate it to the proper levels so it looks exact - but it's good.  The facel ooks right, the expression is good, he's got a little bit of a lumpy, scarred, seen-it-all sense about him and that messed-up right eye.   I'm torn when it comes to how to display it - I love the helmet, but the human head is so dang good.

My hunch is you'll skip this figure and regret it, because you don't go where it's sold.  It's really good, and one of Hasbro's better portraits in recent memory.  Get it if you see it, especially since your collection of The Clone Wars 6-inch figures is going to be pretty small right now.  Almost as small as your The Phantom Menace collection.

Collector's Notes: I got mine from GameStop.  It was also sold at Barnes & Noble and Disney Stores.