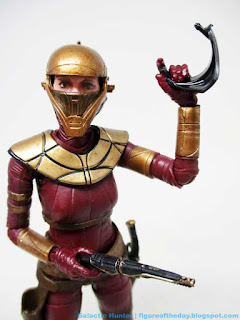 Bio: It is difficult for scoundrels to remain neutral in the war between the First Order and the Resistance, and Zorii Bliss and the Spice Runners of Kijimi must soon take a side.   (Taken from the figure's packaging.) 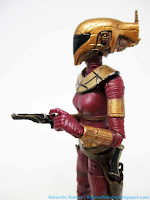 Commentary: After a specter of tariffs, now we get to wonder about raw materials, and factory labor, and bottlenecks at the ports.   Hasbro usually let us know we had a slot situation - that is, they only wanted to make so many SKUs and that they had to pick carefully to make all parties happy - which is why a figure like Zorii Bliss is a curiosity.  Aside from the topic of the Emperor's sex life, The Rise of Skywalker hit with all of the impact of fireworks - a lot of noise, a lot of light, and then it immediately burned out.  And here we are, barely three months later, and so much has happened between Baby Yoda and diseases and the Picard show and the election and everything else that anything from the recent past seems like the oddest of odd choices.  This wave also included Count Dooku and Commander Bly, which tie in to The Clone Wars a little bit, but Zorii Bliss seems like a holdover from a very incomplete movie line.  She's Poe's friend - we didn't get a matching Poe from this movie, at all, just a 3 3/4-inch reissue.  And Hasbro (and/or Disney and/or Lucasfilm) packed her at two per case for some reason.   At least the figure is pretty good. 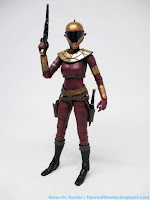 One of the odder things to get a grip on with 21st century Star Wars was just how much of development was done blindly, based on the whims of the licensor or the hopes of a cool costume resulting in a good toy with excellent sales.   I wish the character had more impact on me, because Hasbro did a nice job on this one.  She has 29 points of articulation, with boot cuts, two great neck joints, bend-and-swivel darned near everything, and just about anything you've ever seen from this line short of double-jointed elbows.  Hasbro instead gave her the deeper cut elbows, which are also very good.  She has zero problems standing, sitting, posing with her guns, and looking the best she can.  This is a shining example of a figure design handed to a creative team that perfectly engineered the figure within the confines of the costume.  The removable black visor giving you a peek at Keri Russell's eyes is a huge plus, but it would have been nice to have an alternate head so you can actually see her face.  It's something - and I appreciate it - but it doesn't feel like enough to make it exciting.  The cynic in me is worried someone might be getting an alternate head Zorii as an exclusive that, ultimately, will not sell well. 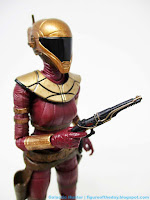 Deco is good - this is a figure that doesn't need a lot.  The dark reddish costume has glossy black boots with grey trim, brown belts, and some metallic gold and silver accents.  Her helmet  is wonderfully goofy with a crest on the back potentially packed with weird technology, looking more like a space ship than a head.  It's great!   The matching collar looks good, too.  Thanks to the numerous elements of this figure - like the mid-torso joint - I can't help but wonder if the toy was designed first to ensure that the costume would match it, rather than the other way around.   It syncs up nicely, and turned out well.  The concept artists did pretty well here.

Because I'm old and The Rise of Skywalker was a huge letdown for me as a movie and as a toy line without even the entire main cast represented in any one scale, Zorii is the kind of thing I wish Hasbro put in wave one in 2019.   It's a cool design, we all thought she would be a bigger deal, and you can't deny that the costume looks pretty awesome.   In 2020, we know what the score is - and it isn't a figure that's going to sell based on the merits of the actress or the part, it's just a cool costume.  Maybe you can use it to populate your other incomplete dioramas, because as of today Jabba's Palace only has a Gamorrean Guard to hang out with, the Cantina only has Greedo in it, and for whatever reason Hasbro and Disney have opted to keep the line increasingly superficial with top-level talent toys only.   If you see this figure, you can be assured it's a good one - but given how few other figures she has to hang out with on the shelf, you might not see this as worth the wait in the check-out online or at your favorite big box stores.

Email ThisBlogThis!Share to TwitterShare to FacebookShare to Pinterest
Labels: The Black Series 6-Inch, The Rise of Skywalker, Zorii Bliss

No regrets here. Bought one because I enjoyed the character and my opinions line up with your review, Adam. Get one while/if you can.