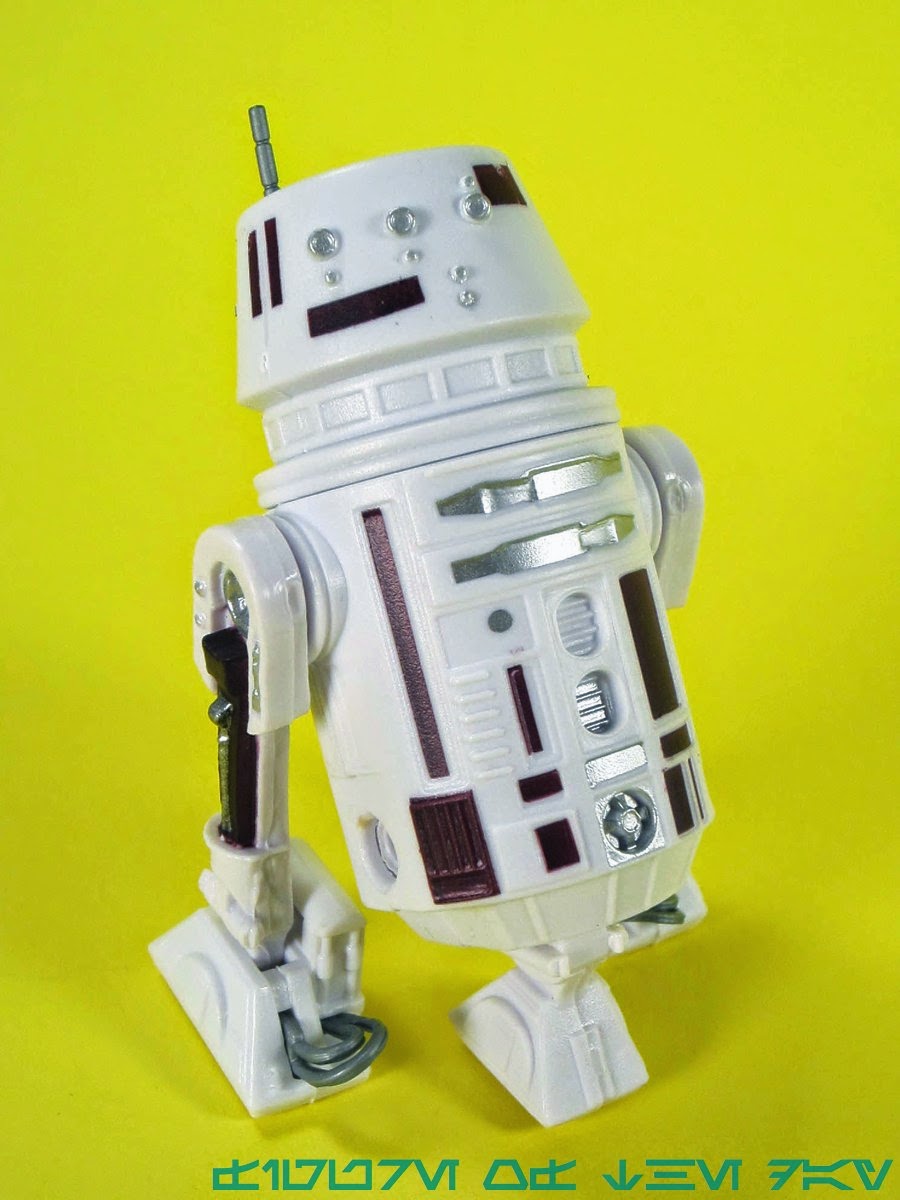 Bio: An R5-series astromech droid stands in the briefing room as Rebel Allliance leaders Mon Mothma and Admiral Ackbar outline the planned attack on the second Death Star.  (Taken from the figure's packaging.)

Commentary: The first figures of the "TIE Pilot" rebranding of The Black Series are here... and much like the first series of the orange-striped series it's kind of a letdown.   Four of the six figures are repacks, Hoth Luke is basically just a new head, and R5-G19 is a redeco of the venerable build-a-droid mold - so no 100% new molds here, kiddies.   Word on the street had it that a new head is about 30% of a figure's tooling budget, and if that's still accurate this is still an underpowered wave.  This is why I won't miss the 3 3/4-inch The Black Series line when it becomes unprofitable, and I hope that those "collector characters" get rolled up into Saga Legends.  (Don't get me wrong - I'm not saying I don't want a super-articulated Mosep, but a $6 Mosep that actually shows up in stores sounds better than a $12 one that doesn't.)  Oh, one other thing - I got a sealed case of this wave, and three clear pieces of tape are used to hold the bubble in place on the front of the card, despite the glue seemingly being more than enough to the cardback.  It's ugly, and it's excessive.  For a collector line, again, it seems like Hasbro is struggling to put out something that's as appealing as previous efforts (Legacy, Vintage, 30th, etc.)  Also, there continue to be no co-sells on the packaging.  But let's talk about this figure. 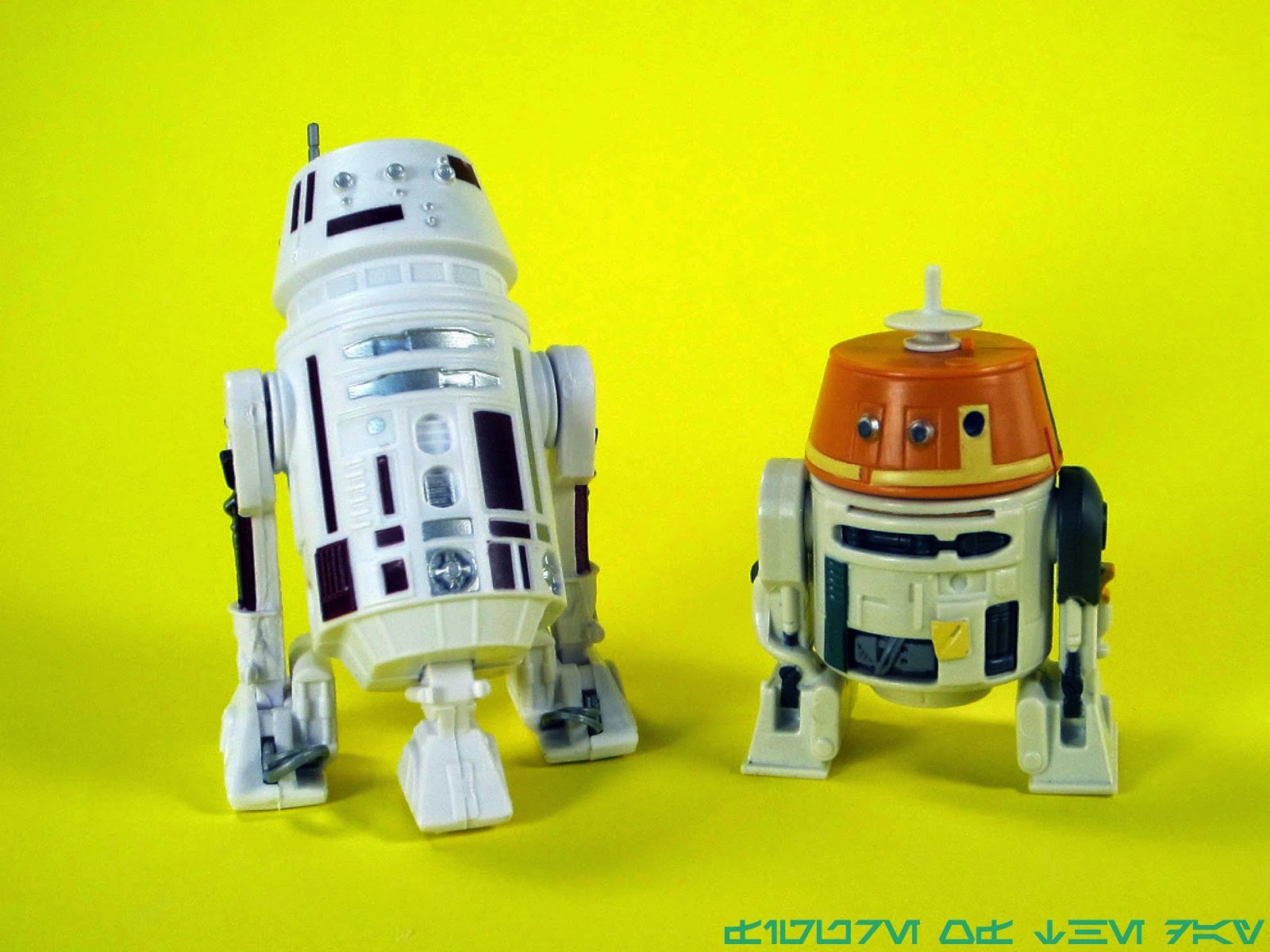 Figures like this one are the reason that I can never be angry Hasbro hasn't done something.  We're getting as close to everything as Hasbro seems to be willing to must, but there's some weirdness here.   R5-G19 doesn't appear on his own cardback - Hasbro got a picture of another R5 unit.  The markings are different.  If you look online you'll see images of a similarly colored droid with different markings than that of the picture used for the cardback - so this means Hasbro found an even more obscure droid and made it, and there's still that other one with the different markings to do, if Hasbro or a customizer is so inclined.  This actually makes me pretty happy - the error means there are more droids, and more droids mean I have a reason to get out of bed in the morning.  More droids for everyone!  ...if you can find them for sale. 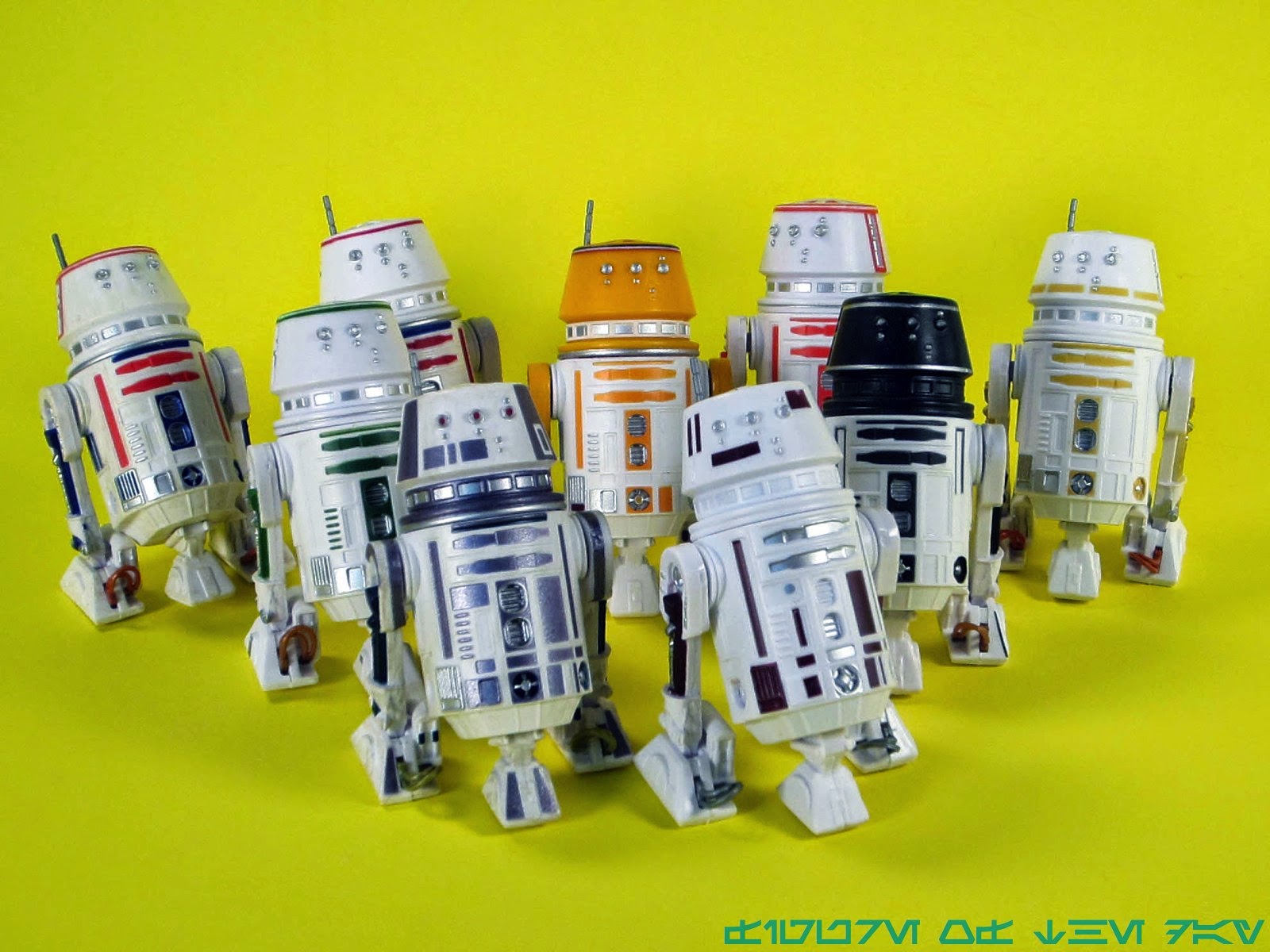 This body has been used for numerous figures, with the dome making its debut as the orange R5-A2 unless I'm forgetting one.  It has also been used for R5-C7, R5-D4, and numerous Star Tours figures.  You get a removable dome, removable legs, and a central removable third leg - and no other accessories.  Deco matches the movie with sparse dark burgundy markings as well as silver panels and other highlights.  It's sparse, but largely good.  It also means the build-a-droid molds are still usable and Hasbro has no real valid reason to not make those "lost" Droid Factory robots from a couple of years ago... but I digress.  This is a neat figure, you don't have it already, and I would suggest ordering one online before it vanishes.  It's neat, and while I have to assume Hasbro will warm up to the idea once more that easy repaints like this one are a great way to make long-time collectors happy with "something new" with a minimal investment on their part, I also assume that this is all going to come to an end when the focus shifts to annual new movies.  The golden age has lasted for nearly two decades, friends, and it's probably not going to last for much longer.

I'm pretty irritated that we're seeing Hasbro spend a lot of development on new cardbacks and new production without new figures to go in them.  Don't get me wrong - I'm happy Malgus and Starkiller are back for those who missed it, and for the sake of argument let's say people wanted a third wave with Black Series Yoda at 2 per box and a second with Vader at 2 per box.  (Which is smart on their part.)  But getting only 2 new figures in a wave is kind of painful, particularly when only 1 - this one - is an unquestionably new character and from the look of things, probably the last new movie character to get a 3 3/4-inch figure of 2014. For those keeping track, that makes 3.

Collector's Notes: I got this from Entertainment Earth.  I have not seen these figures show up in stores yet.