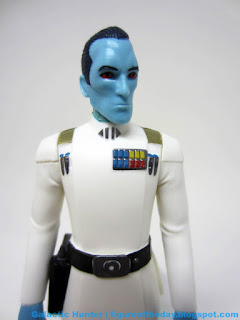 Bio: As the fledgling rebellion challenges the Galactic Empire in the wilds of the Outer Rim Territories, it faces a new danger: the most cunning of the Emperor's fleet officers.  A tactical and military genius, Grand Admiral Thrawn coldly dissects rebel operations and methodically devises brilliant counterstrategies that make him unstoppable.  (Taken from the figure's packaging.) 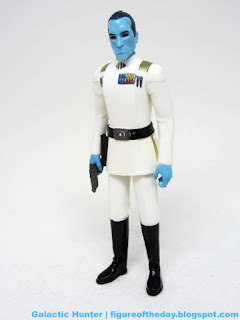 Commentary: The first new villain in the 1990s era of Star Wars, Grand Admiral Thrawn was previously thought removed from the franchise when Disney's purchase of Lucasfilm wiped the Expanded Universe slate clean so they could make movies and comics and everything else without fear of trampling over the well-trod ground.   Lucasfilm did a good job keeping their stories mostly straight, so we've seen a lot of loyal fans get angry when told Jaina Solo and Mara Jade and Starkiller (the person) no longer exist.   The Governor has granted a pardon to precious few familiar faces, like Quinlan Vos via The Clone Wars and now Grand Admiral Thrawn thanks to his appearances in Star Wars Rebels.

The figure is acceptable.  It's not bad, and it's largely consistent with others - I'm not a fan of the "skirt" piece which we saw go away briefly in the Saga Legends/Mission Series figures of 2013 and 2014.   Here, it imposes a restriction on the figure's hips so they can't swing forward.  His shoulders and neck have no problems moving, and his blaster fits nicely in either his hand or his holster.   His costume sculpt is immaculate, a perfectly sharp white costume that gives you what Ralph McQuarrie's take on Thrawn might have looked like.  The gold epaulets were replaced by a couple of gold bars, but he still has the command badge and code cylinders you've come to love.  The face is nice and clean, blue and nicely decorated.  The Chiss hair is very dark blue, with shiny black boots and a nice silver belt buckle.  My sample was a smidgen back heavy, but he seems to be standing unassisted without too much trouble.   He won't be doing any sitting in ships, though.

The gun is nice, but the spring-loaded gun is sort of ridiculous.  He can't stand and aim it well, and the gun does look pretty swell.  I got a case, and the one I opened - unbeknownst to me - was missing the top of the blaster.  It's just not there.  So keep an eye out for that.  The thing shoots just fine, but it's a terrible hand-mounted weapon.

Thrawn is a pretty good figure and I assume if it gets good distribution, he'll be a slow seller.  He's not bad, but the other figures in the wave are probably a bit more exciting given the love of the movies and the relative slow growth for Rebels thanks to limited TV distribution and even more limited toy distribution.  (Seriously, how can Chopper not be on the market right now?)   Anyway, get Thrawn if you can.  You'll probably be very glad when the Rebels figures suddenly dry up and it turns out a complete collection is actually quite small.

Collector's Notes: I got mine from Entertainment Earth.  Two rank badge decos exist - this is the "corrected" one which matches the packaging.