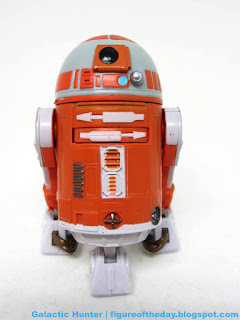 Commentary: Is it R2-Y9... or R7-F5?   Born of comic, re-created by vehicle guide book.   Which is correct?  The action figure, of course!   Hasbro went with the name R7-F5, so that's what it is.  That's how this works.   If Lucas' camp changes it again, great - but this is the name they assigned to it in the gorgeous handsome exclusive boxed set last year.  Am I biased?  Oh yeah. 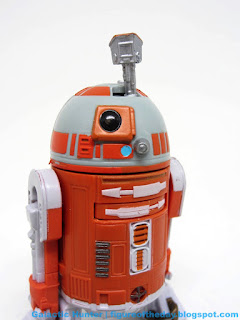 The Clone Wars has a ton of awesome droids, many of which I pitched but not all of which were taken.  Some of them seem to be on the way elsewhere in the near future, but let's not dwell on that now.   Agent orange here takes the same Bartoo Deetoo body and slathers it in new pigments - a grey head has orange markings, which are matched on the legs and body.  White highlights bring it to life nicely, and while mine stands fine on three legs it would seem mileage may vary - from set to set and figure to figure, that third leg sometimes works like a charm and sometimes works some of the time.  The clean droid looks sharp, giving us more of a color we don't see a ton of in this line.  Disney had a different orange droid part suite recently, so this precise configuration as seen in "Shadow of Malevolence" is only available as a toy in this boxed set.  So far.  Maybe someone can make another one later.

The good thing or bad thing about the astromech droid format is that there's not a lot to do with it.  You can pop open a chest compartment to whip out an arm, you can raise a sensorscope by pushing up on that third leg, and there are little wheels.  It's cute.  If you go for this kind of thing - and I hope you do - you can order them online or at some smaller comic and collectible shops.   It's not a significant character in the saga, but I can say that the people behind the set were devoted to ensuring fans had a crack at an exclusive boxed set with six new droids and nothing in it that's just different enough to make you mad.  I'd say the goods were delivered, and I hope the QC on each sample is as good as the one in my basement office.