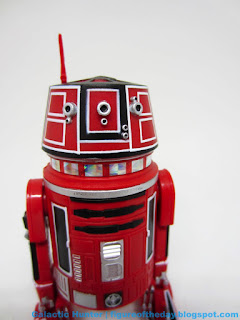 Bio: R5-K6 was the astromech droid alongside Garven Dreis, the leader of Red Squadron, during the Battle of Yavin. R5-K6 and Dries were shot down while attempting to destroy the Death Star.  (Taken from the figure's packaging.) 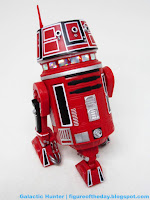 Commentary:  Oh, there are stories surrounding the mold of R5-K6 that would stun and delight you.   Some are so ridiculous you wouldn't believe me if I was allowed to tell you them - but they're true.  Some are very believable.  But for now, all I can tell you is that it exists and it's pretty good.   Red Leader's droid was made twice as a 3 3/4-inch scale robot - once for Disney's droid bins, and once in the scarce and popular "Scramble on Yavin" Battle Pack.  Weirdly, I found a bunch while it was super duper scarce.  Life's strange.  So is Oxnard, CA.

The droid uses the R2-D2 body from 2013 with new deco and a new dome - but you knew this.  You know the score.  He's not even 4-inches tall - unless you count the antenna - and has a real sharp prismatic sticker around its dome.  This is a first, as far as I know.   The paint applications are sharp, with black and white boxes all over the figure and one of the most ornate domes you've ever seen.  This droid's deco, as well as the Death Star control room, all look like they came from a completely different movie series - it's gorgeous and vibrant, not quite the "industrial test kitchen in space" look that seems to be very popular on most ships.  If you didn't know this design was in the original movie, I'm sure it'd be derided as being from the fever dreams of some designer vinyl toy fanatic.  But you know better, and so do I. 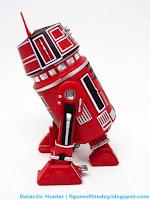 The functionality from R2-D2 is mostly maintained - the black panels on the legs come off to be swapped out with booster rockets (which are not included), and the black panels on the front open to reveal two articulated arms.  You may have to fight a bit to get the claw and data port out, but they're both there.   If you twist the dome, the third leg drops down.  All three legs have wheels.

The final design is sharp and crisp.  Unless you're suffering from droid overload, you probably will want to get this set.  I don't see them around much anymore, but given the price of R2-D2 since he first disappeared it would seem there is indeed a market for 6-inch scale droids.   I sincerely hope you got yours when the getting was good, mostly because Hasbro seems to have backed off from its proclivity to repaint everything in recent years.  What a shame!  I hope more repaints of this one are on the way.