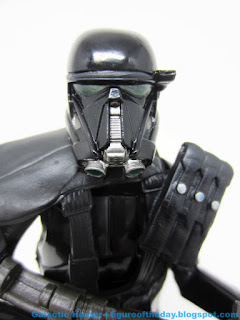 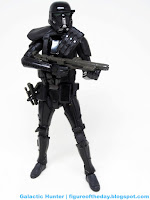 Commentary:  Now this is interesting - the cheaper versions and shorter versions of the Imperial Death Trooper have paint applications that this guy lacks.   The 6-inch Target 3-pack version has the tactical gear, and you may notice that the grenade looking things over his belt are molded in black.  The 3 3/4-inch figures (both 5-jointed and Walmart exclusive) are painted silver.  Interesting.  Other than that, the figure is basically the same as the regular Black Series 6-Inch Death Trooper with that extra pauldron and harness. Oh, and that whole get-up is one single rubbery piece, so it fits a little strangely.

The black glossy plastic figure has silver buckles, and curiously matte black gloves and joints.   The body glove is painted, so it's not just black plastic throughout - you will likely not notice this.  The very very dark green elements of the helmet barely register as green, which is not terrible - at least it's consistent with the other 6-inch Death Trooper - although I loves me black and bright green.  I had an Apple ][+ in the 1980s, so green-and-black are the colors of technology and the future!   The helmet has nice silver bits and the ammo pouch on the shoulder has silver snaps.     The Vader-esque belt buckle also has some silver paint. 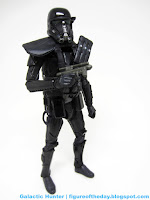 Articulation is, as the previous version, very good.  Mine is sturdy with double-jointed knees, swivel hips, bend-and-swivel wrists, and everything you could want short of double-jointed elbows.  It's a great Hasbro figure, and he has no problems holding his big rifle with both hands.  The little blaster fits nicely in the holster, so the figure seems to work exactly as designed.  There's a little room in the harness area, but given the figure's articulation you'd rather have some slack than not - these things can break under stress, after all. 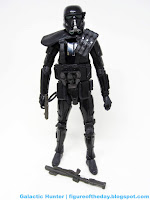 As part of a 3-pack which infuriatingly includes the same friggin' Jyn Erso, you may  be waiting for a sale.  I can't blame you - I got it at full price (OK I had a coupon when it hit in October) but it's getting marked down at some Targets.  For $40 or less, this is a good set.  If Jyn Erso is something you don't already own, even $60 is decent.   I would advise making this set your very first purchase for The Black Series if you're getting in to it late in the game, just because you can skip single Jyn and probably the regular Death Trooper too - this one's just better enough to make it the superior buy.