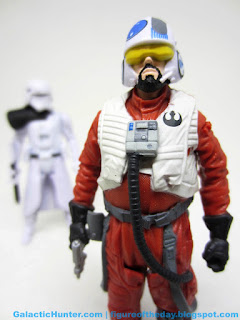 Bio: An ace X-wing fighter pilot for the Resistance, Snap Wexley undertook the vital recon mission that confirmed the location of the Starkiller weapon, and flew in the assault against the abominable weapon. (Taken from the figure's packaging.) 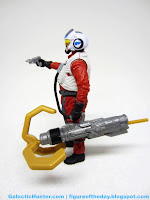 Commentary:  Let it never be said that Hasbro doesn't listen.  Fans want lots of Rebel (and Resistance) Pilots, so we got Snap Wexley early on along with Poe Dameron and Asty.   One one hand, that's cool - but on another, it's not.  The figures borrow heavily from the aesthetics of the original 1979 Luke Skywalker (X-Wing Pilot) figure with limited articulation and a non-removable helmet, plus the indignity of an opaque yellow visor.  It's not pretty.   It's consistent so far, but it wouldn't stun me to see newer, better versions of these figures as Hasbro starts to get in to The Vintage Collection in 2018.

Snap's got no problems standing, but sitting provides a challenge - he's a thicker man, so the design needs to account for the hip joints swinging forward.  As he is, the legs are stopped by his crotch region pretty quickly.  He won't be able to sit in an X-Wing, even if he could fit in it - and you'll recall Hasbro's X-Wings for The Force Awakens were a tight squeeze for even smaller figures than this one.   The sculpting seems on par with the rest of the line, featuring generous detail work translating a cloth flight suit to plastic.  The vest has lots of detail too, and a swell Resistance logo on the flight vest.  The cable connects the chest box to his pocket, plus he's even got a working holster for his blaster.   I love the deco on the helmet, but the flesh is pale and the beard is weird.  This is an ideal figure for buying, putting on the shelf, and then never touching again. 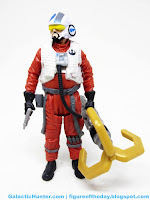 I'm not a big fan of the grappling hook gun - I don't know why it's here, and I have a strong dislike for most of The Force Awakens' bonus weapons.  Rogue One figures had rocket launchers that better fit the spirit of the film - this one just looks like someone cobbled together something because they were on deadline and Disney wouldn't get them reference material.  (I'd bet money this is actually what happened.)    The grip is positioned so that Snap can carry it like a briefcase, not exactly holding it up or aiming it at someone.   This is good, because the figure can hold it on a flat surface and not topple over.  This is bad, because it's the antithesis of being an action-oriented figure.  It looks like he's just lugging it around Comic-Con. 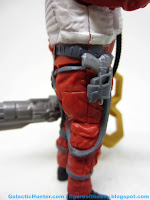 The set wasn't a huge hit - you can get it on Amazon for about half price.  Hasbro has a weird habit of releasing the characters that benefit from the movie early on, with some of the weirder ones after the movie comes out.  Thing is, fans are more likely to buy anything without knowing if it matters or not prior to seeing the film, whereas after the movie is the only time they'll probably understand why they want that Finn or Jyn or whoever.  This was a good set for fans - a trooper and a new pilot are a great combo pack.   It's just that the figure could be better with a removable helmet, better face paint, or better articulation.  For $8 or less get one.  For $15 or more, I'd say you can wait it out.

Collector's Notes: I got mine from Entertainment Earth a million years ago.