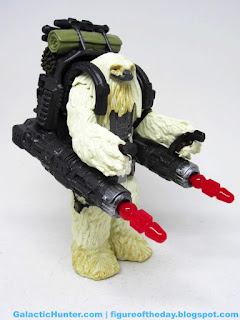 Bio: Moroff seeks out combat zones to sell his brawn and firepower to anyone who might need it.  The mighty Gigoran mercenary figures there's money to be made for a towering heavy of great strength.   (Taken from the figure's packaging.) 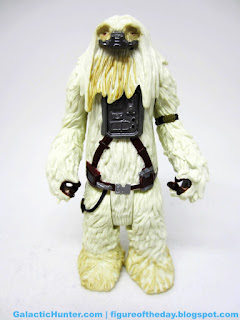 Commentary:  Before the movie came out, I was thrilled to have Moroff as an action figure.  He was a big, hairy alien with lots of guns and a distinctive look that recalled Wampas and Wookiees.   The Moroff [FOTD #2,304] figure first shipped as part of a must-have two-pack with a Scarif Stormtrooper Squad Leader, but this version which shipped to Kohl's was slightly different.   I don't mean "batch difference," I mean there are conscious changes made to the accessory decoration and maybe to the figure itself.  The figure's changes are minor, but the backpack's look is significantly different.   For those keeping track "significantly different" means "I can describe how it's different without you having to compare it side-by-side with the other version."

The Kohl's Moroff is, at first glance, exactly the same as the regular 2-pack version.   When placed side by side, there's a minor difference in the face as the Kohl's version has a little less brown around the eyes, and the "beard" is a little more brown and less is more completely decorated.  The silver on his body seems to be a bit brighter, while the 2-pack version seems tempered with a hint of brown in it.   Depending on the sample, the feet look a little more yellow.   Your mileage may vary.   As far as the figure itself goes, I don't think that either release is different enough where you're going to want or need (or recognize) both. 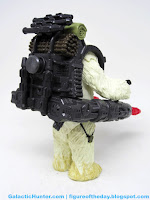 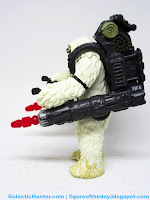 Now what makes the figure interesting is his weapon backpack.  The 2-pack version is a brown color, while the Kohl's 4-pack is black plastic.  The 2-pack version has some painted details on the shoulder harness, while the Kohl's 4-pack is unpainted.  The cannon barrels on the 2-pack version are unpainted, while the 4-pack from Kohl's has silver "scraping" or "paint wear" on it.  I'd say it's the very definition of just different enough to make you mad - there are obvious, deliberate changes having been made to the accessory and none of them are necessarily interesting enough to warrant picking up this version just for those changes unless you, like me, still have a weird burning urge to pick up pretty much any moderately observable change in a 3 3/4-inch Star Wars figure. 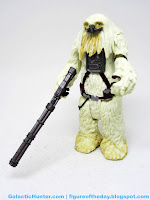 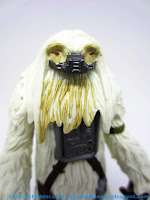 And that wraps it up for this set.   Pao isn't significantly different enough to warrant a review as an altered figure as far as I can tell, as I was unable to note any obvious changes.   At $25 or less, I'd still say this boxed set is worth picking up for variant fanatics and packaging hounds.   3 out of 4 figures with notable changes ain't bad, although perhaps doing a non-dirty Moroff or one that had hair with a fairer quality to it - paler white or even milky plastic - would have been a lot more exciting and interesting.   As it stands, get either version of Moroff or both if your budget allows, as each release is packaged with at least one significantly different and therefore worthwhile trooper you can't get anywhere else.

Collector's Notes: I got mine from Kohl's, but it's cheaper on Amazon.