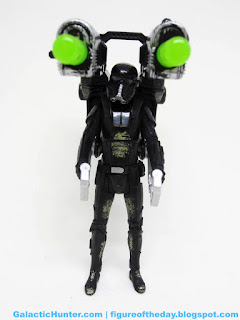 Bio: The elite soldiers of Imperial Intelligence, Death Troopers are encased in specialized stormtrooper armor with a dark, ominous gleam and serve as bodyguards and enforcers for Director Krennic.   (Taken from the figure's packaging.) 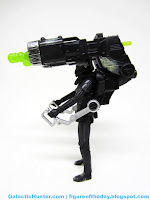 The 5-jointed figure adds a bunch of sand markings and the silver seems to pop a little more.   The cheek tubes are darker, rather than the bright green of the first release, but the figure stands just the same.  He holds his blaster just the same.  If you're an army-builder and want the full squad of six, you may as well get this one just to keep things varied. 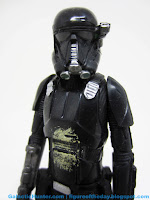 What really surprised me was that they redecorated his big rocket backpack accessory.  Not only were sandy patches added, but the silver arms and grips for his hands were painted too!  The first release in the 2-pack had black, unpainted grips.   Why go the extra mile?  I have no idea.  The "gift-giver" customer at Kohl's would never notice, and I doubt most collectors would notice either.   I can't imagine there was a board room pitch where someone said "So what's special about this?" and someone said "Distinctive silver hand grips!"  It's unique, and as such an essential buy for the trooper fan. 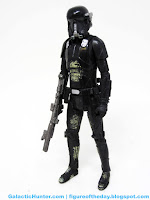 I can't say the set is a good value at its regular retail price, because $50 for $30 worth of plastic is not a good deal.  For the current going rate on the secondary market orbiting $25 it's a decent buy, particularly if you want and do not have the excellent Moroff and Pao figures in the set.  I wish they could have dropped Pao and just tossed in a Scarif trooper instead, but such is life - for the right price it's worth tracking down this Death Trooper!


Collector's Notes: I got mine from Kohl's, but it's cheaper on Amazon.