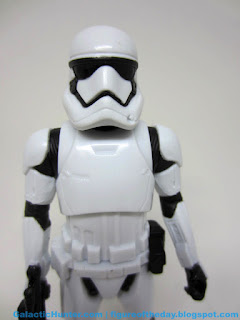 Bio:  Equipped with sleek armor and powerful weapons, the Stormtroopers enforce the will of the First Order.  (Taken from the figure's packaging.) 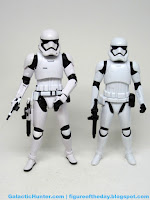 Commentary:  I really wish that this particular First Order Stormtrooper - currently exclusive to non-US markets - makes it out here.  Why? Cheap troop builder.  The 6-inch action figure stands at attention with only 4 points of articulation, but it's about $6.   It stands the same size as the $20-$25 super-articulated The Black Series figures, so on a shelf full of figures it'd be great to have these cheap guys to flesh out an army.   Of course, for the time being these cheap ones are harder to get than the super-articulated figures.  Oh well.

The import has swivel shoulders, a rotating neck, and a swivel waist.    It's light but sturdy, a figure that stands with no real problems and a blaster fused to his fist.  Unlike the black/white blaster in the movie, this one is all black - basically classic Stormtrooper colors.   The paint is pretty good, as the white plastic figure has a fair amount of black details.  Most of the exposed body suit bits are decorated, but for some reason the back of the shoulder joints were not - and it's pretty obvious.    The helmet could probably use a little more paint, but the product isn't bad as it is - you can see the corners they cut to keep the price relatively low.  Of course, in the USA a figure of this size would be $6 or $7, and the 12-inch figure of similar quality would be $10.  So that'd be the better buy. 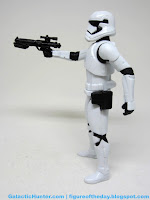 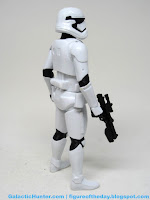 If these were sold in the USA, I'd recommend you go out and buy a shelf full of them to hang out with Kylo Ren and menace your other sequel trilogy figures.   At this point it's possible the same exact suit will be used in The Last Jedi and Hasbro could bring this figure out to the USA in a new box, mixed in with the other hard-to-find 6-inch figures from the very same assortment.  But we don't know these things.