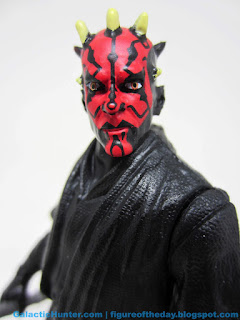 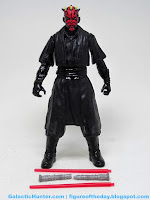 Commentary:  It's kind of amazing that the biggest legacy of The Phantom Menace is the character with the least dialogue.   Darth Maul is pretty much the only aspect of that movie to survive mostly unscathed, which is impressive given his bisection at the film's climax.   He looked cool, and dammit he needed to - the Jedi heroes were largely bores, everybody seemed to wear gowns, long coats, and robes, and the movie's centerpiece was a race that gives new meaning to "show-stopping."   Fans latched on to Maul, and naturally he had to go - but he's been resurrected a few times, becoming the prequel era's Boba Fett.  Maul even came back in The Clone Wars giving him an arc that brought him in to Rebels - but most of the toys still center around The Phantom Menace, including this "value" 6-inch action figure.  It's basically the same size and proportions as The Black Series release with less articulation, no soft goods, and a preposterously cheaper price point.  Seriously, $6.  $6! 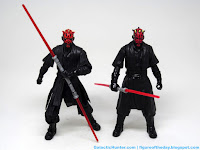 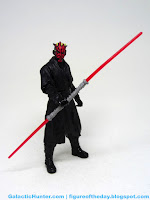 It'll be a great stand-in for your 6-inch figure shelf if you missed the 2013 super-articulated Maul - or if you want to display that figure with his full robes and hooded head, and want an alternate costume version hanging around.   As far as I can tell this sculpt isn't the same as the other ones, which is nifty given how many figures seem to be derived from the same digital sculpts these days.  The figure has a decent Ray Park head and amazing robe textures, plus slick black boots.   Courtesy of his oh-so-black duds, glossy black paint has been added to his boots, gloves, and belt to add some level of contrast in a sea of darkness.  The arms, neck, and waist rotate freely and both hands have no problems gripping his lightsaber - combined, or halved.  I love how he stands with no problems, making him an ideal desk figure.

Maul has the fanciest weapon of the format - the lightsaber is completely unpainted but splits in two with removable blades.  This is fancy - fancier than many of the 1999 Maul figures, at a fraction of the price.  The only place he comes up short is deco.  The heads of every sample I see have a little red "ding" on his nose which looks weird, and I'll probably touch up with a black marker after this review.  The horns are only partially painted - the front ones are, but the ones on the back of his head were left unpainted to keep costs down.  The lightsaber's hilt is also completely grey, which was unusual for Hasbro.  Maul figures usually have red or black buttons and switches on the hilt to add some color to the otherwise bland silver pole.  This one isn't silver, but grey.  You might want to paint it. 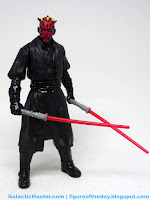 I got my money's worth - it's a nice figure for the price, offering a worthwhile size and just enough detail to not be terrible.  The plastic quality feels like a plussed up McDonalds toy, but I'm fine not having to necessarily eat the food.  (More time to go to Lenny's.)   Based on the Disney-era figures, I assume we'll likely never see a figure from The Phantom Menace for Maul to fight.  If we do, it'd probably be Qui-Gon Jinn but I sincerely doubt it'd be soon or ever.  If you stumble on this one at $6 or $7, get it - I've seen so few since its release last year that I don't know if we'll see a ton more.   Maybe you're luckier than I am, but I rarely see these up for sale on eBay or Amazon either.  It's one of those weird little Hasbro figure items that you don't know and don't care that you don't have.

Collector's Notes: I got mine at a Big Lots last year - she shipped with Rey.  I've seen these figures maybe one or two more times since - they don't seem to be particularly easy to find, but the assortments of this kind of figure hit Dollar General, Family Dollar, and Big Lots in my neck of the woods.