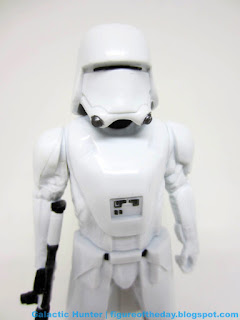 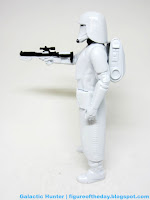 Commentary:  While I'm extraordinarily fond of this figure format, the 6-inch First Order Snowtrooper seems to feel more like what you might expect when you hear "cheap 6-inch figure for export markets."   It has a good center of gravity - this means he can point the blaster while remaining standing - but it's hollow with softer detailing and not all the paint applications you might want on your faceless troopers.   Interestingly, it did see release before the 6-inch  The Black Series action figure, but not by much.  This is a neat discount collectible, but not much of a display piece. 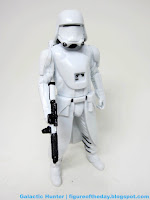 The sculpt seems to be pretty much the same as the various 3 3/4-inch versions of the trooper with minor changes.  You'll notice less sculpted detail in the backpack, for example.   Why the change?  I have no idea - I can't imagine it has to do with actual cost.  Most of the folds and wrinkles are in the same place, and you get a better look at the kama sculpt and how it would have allowed for a great range of motion were the figure not just one big piece from the waist joint down.   It feels hollow and light, with only three more points of articulation at the neck and each shoulder.   He stands there and looks neat, sized to fit with your more expensive figures if you can get past the lack of paint.


One big change is that the pouches on the kama were moved forward slightly, but this may not be immediately obvious.   Jakks Pacific's big 20-inch Snowtrooper is similarly sculpted.  The McQuarrie-esque markings below the neck on the armor are left unpainted, as is the black stripe that goes around the back and sides of its helmet.  Interestingly, the straps around the boots are still painted black while the markings on the shoulders are left off entirely.   Much like Finn, the Snowtrooper blaster is decorated differently than the movie - you'll notice more black on it, with fewer separate markings overall.  I think it looks great, visually speaking, but it's not authentic and it's not like you can swap it out without power tools. 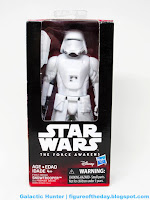 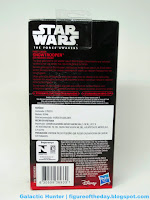 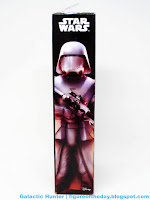 I thought I was going to say "Oh, you can skip this" without reservations - but here I am, somewhat enamored by its off-model deco and different-than-other-Hasbro-figure pouches.   On a shelf with other First Order figures, this release would add some variety at a lower price.  With any luck, it'll see distribution following the sequel line's launch this year.  It's probably more likely that this one will just vanish and be forgotten, except for those who can't not have one and lurk on eBay until the itch is scratched.  If you can score it for $10 or less, it's neat.  I'd even say $20 or less is worthwhile, although once you get the small, efficient box in your hands you'd probably scream bloody murder about how you got ripped off.  They're astonishingly small and less wasteful compared to most American toys, which is sort of gleefully upsetting.