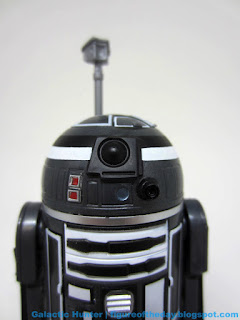 Bio: R2-F2 was an astromech droid for Biggs Darklighter, a Rebel Alliance straighter pilot. Both R2-F2 and Darklighter perished in the assault on the Death Star.  (Taken from the figure's packaging.) 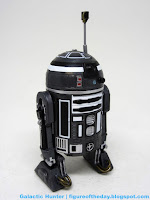 Commentary:  Confusion is real.  R2-F2 is now Biggs Darklighter's droid - a while ago it seemed like it was R2-Q2, when the 3 3/4-inch figures were made in 2006.  Perhaps this is not to be.   Well, things change, and this figure is much darker and slightly differently decorated than that figure.   The R2-Q2 figure was made with that designation because that's what it was called a the time - and it was unclear if it was one droid or two droids.   Was it a Rebel or an Imperial?  Were there more than one?  We've seen droids named and re-named over the years, and now it looks like it has been renamed yet again.  (If you see the "Double Agent" thing on Wookieepedia, that was part of my initial pitch. Go me.)

Anyway, R2-F2.  It's dark grey with lots of white highlights and black detailing.  The little lights on the right side of the dome are now red, with a blue dot in the middle.  The black eye remains, and the general layout matches previous action figures.  Since there are precious few reference photos available to the public, I don't know if it's accurate.  It sure looks neat, but it might be incorrect as R2-Q2 (who has the same basic decoration) is generally made as a much lighter grey color.  It's sharp, but as of now there are no companion Biggs Darklighter figures to go with it.  Or X-Wings, for that matter. 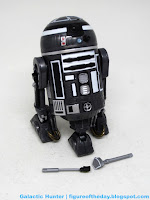 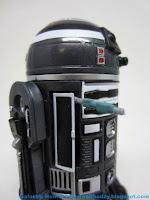 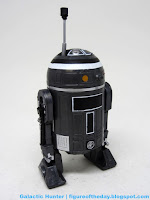 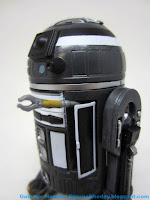 All of the trimmings of R2-D2's body are here like the retractable third leg and the pop-open arm panels.  The dome has two removable panels with swappable scopes, and it's a generally good looking droid.  It might be a smidgen underscaled for the 6-inch action figure line, but there's no denying that in and of itself it's a decent looking piece.   In my neck of the woods this set is long gone, but the asking price was surprisingly good given what you get - 3 droids for $56? That was a bargain.   If you see it for around that price, do yourself a solid and buy it.   In five years of 6-inch scale figures, we've had a grand total of four astromech droids.  It's still more than 3 3/4-inch figures had in the first 20 years (not counting R2-D2 variants) though.