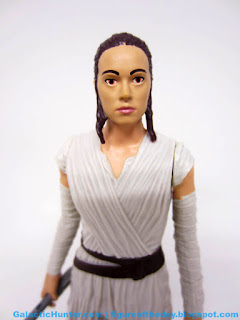 Bio:  Rey is a resilient survivor, a scavenger toughened by a lifetime of dealing with the cutthroats of the harsh desert world of Jakku. (Taken from the figure's packaging.) 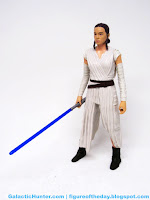 Commentary:  This is a 6-inch Rey figure with limited articulation - I'd say it feels like a really good, really big Burger King toy.   She has jointed shoulders, a jointed neck, and a jointed waist.   Rey seems to be derived of the same basic digital sculpt that formed the basis of numerous other products, which is good and bad.  One one hand, she has a decent likeness and a better-than-expected paint job on her head.  On the other, she feels a little hollow.

The figure is light on decoration - and mass - as you'll see with a tan dress sporting minimal contrast.  A brown belt and shoes do a good job breaking up the sea of single color, and her skin has been painted surprisingly evenly on her hands, neck, face, lower legs, and upper arms.    With more paint, this would be an amazing figure - as is, it's still decent. 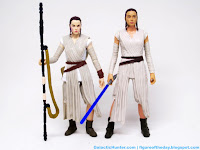 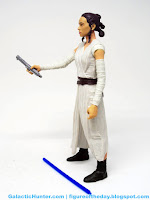 Rey has no problems standing or holding the lightsaber, but can't actually do much of anything. This makes her a decent collectible sized to fit in with your The Black Series toys - at least in terms of scale.  When it comes to deco and articulation, this is more or less a great toy for kids.   It's a shame she wasn't easier to find - heck, I'm not even sure if she's rare or not since the assortment is so scarce - but it's a big, cheap Rey that you wish you had a year ago.  What really surprised me was the lightsaber - not only is it removable from her hand, but the blade pops out of the hilt.  It's also the darkest blue lightsaber I think I've seen on a Hasbro action figure.    It's not opaque, but it is fairly dark.  The hilt is a slightly different take on the classic "Skywalker hilt," as the top isn't tapered - it's flat.  The blade plugs right in, and the grip is completely undecorated.

This is by no means the most impressive or most fantastic figure in this style, but it is the only girl so far.  Hasbro didn't take any shortcuts in terms of delivering a figure that looks like Rey with an appropriate amount of personality, and thankfully there's a fancier version for fans wanting The Black Series levels of accessories and decoration. And BB-8.   I like this one enough to hope Hasbro cranks out some more, and I've been haunting those lower-level discount chains hoping to see Jyn Erso, a classic Stormtrooper, or any character that might translate nicely to the "cheap kid toy" format.   If you see Rey for six bucks, she's worth your while to snag mostly because I doubt most people are going to see her anywhere, ever.

Collector's Notes: I got mine at a Big Lots last year - she shipped with Darth Maul.  I've seen these figures maybe one or two more times since - they don't seem to be particularly easy to find, but the assortments of this kind of figure hit Dollar General, Family Dollar, and Big Lots in my neck of the woods.