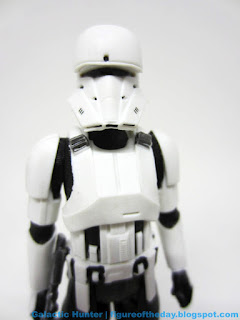 Bio: Imperial combat drivers operate the Empire's arsenal of armored repulsor vehicles, from troop transports to heavily armed hovertanks.  Combat drivers are lightly armored, relying instead on the thick skin of their vehicles to protect them in battle.  (Taken from the figure's packaging.) 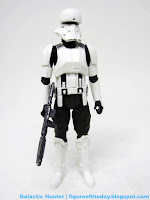 Commentary: Tanks for the pilot!  Actually, no tanks - just pilot.   Rogue One gave us a short line with great designs that hopefully Hasbro will revisit and/or Disney will revisit with future movies. Imperial Hovertank Pilot figures provoke collectors to ask "So where't the tank?"  It's kind of funny - it used to be the other way.   We'd get an X-Wing, TIE Fighter, AT-ST, and so on and it'd be years until the pilot figure came out.  If we were lucky, just one year - figures and pilots hitting at the same time were something of a rarity unless it was a pack-in or a prequel trilogy thing.

The Hovertank pilot is interesting in that it shows how much mileage Disney (and Hasbro) got out of the design - you can tell the body, arms, and legs are largely shared with the Scarif Shoretroopers and AT-ACT drivers.  The belts are tweaked, the helmets are changed, the deco is different... but the body is largely the same.  All of the joints move freely - unlike certain other pilot figures I could name - and it seems to share parts with the single Shoretrooper.  I might be wrong.  I love how the design doesn't have a belt to hinder hip movement, because I really do need all the parts to swivel freely to be happy in life.  Otherwise, the cutting begins.   The figure's helmet is probably my least favorite from Rogue One because it has a lot in common with the helmets I didn't like from The Force Awakens.     There's no real "face," just a white slope with a slit for the eyes.  I like a hint of a mouth or a nose, but that's not on Hasbro.  The figure seems to be a pretty close match to the movie with a black bodysuit, white armor, and a silver buckle on each shoulder.  I was surprised to see Hasbro even painted the vents on the back - nicely done! 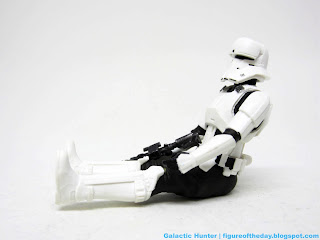 This is a weird set, and this is a strange choice of figure for that set.  I'd love to see more, and a vehicle, so people could troop build at a sensible price.  The other figures in the box are good, and I absolutely love the painting on the package.  It's a great set for kids or collectors in terms of character selection, because you get good guys,  bad guys, troopers, heroes, villains, and whatever it was Forest Whitaker is doing.  I'd have been fine if Hasbro tossed in a normal Stormtrooper or Shoretrooper in the set instead, but hey - I'll take something new.  It's a nice design that can stand or sit easily, and he can hold his blaster.  If you're sitting there griping about elbow joints, you know and I know that's not the kind of figure Hasbro set out to make.  Taken for what it is, Hasbro ticked all the boxes and delivered one of its better pilot figures in the last few years.   If you think you might want this set just for this figure, I'd say it's worth tracking down.