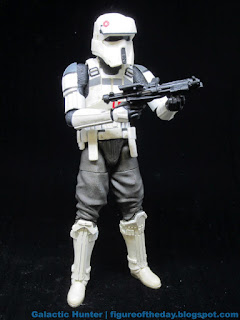 Bio: The Empire’s combat drivers are trained to handle everything in the Imperial ground arsenal, from heavily armed AT-ATs to the more utilitarian AT-ACT walkers.  (Taken from the figure's packaging.) 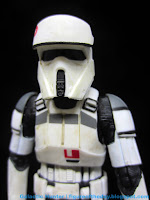 Commentary:  If you  like Shoretroopers, how about buying one that has less color?  The  Imperial AT-ACT Driver is basically the same as a basic Scarif Stormtrooper with new deco - which means it's also basically the sam as the Hovertank Pilot with a new helmet and new colors.   The 6-inch figure has pretty much the same articulation - just under 30 joints keep this figure able to pose any which way you might like.  He can even sit - there will never be an AT-ACT for him, but that's life.   The figure feels sturdy, has no problems standing, and looks great.     Hasbro has wisely reused a good mold - bits of the Scarif Stormtrooper have been used for at least four different figure releases so far.  That's using all the parts of the buffalo.

Deco is good, but I'm not sure if it's right or not.   One of the challenges of mass-producing toys with different kinds of plastic is getting the color right.  Indie toymakers like Onell Design excel at this.  Hasbro's still growing.   The shin armor on the AT-ACT Driver are painted white, while the arms, feet, torso, and head are molded in white plastic.  You can tell the difference - they look like different materials.  The colors do match quite nicely, but it's clearly a different material.  The biceps don't quite match the forearms, or at least that's what my eyes seem to see. 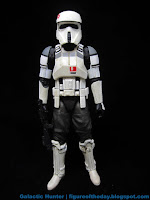 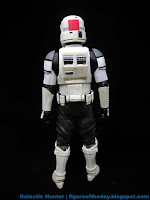 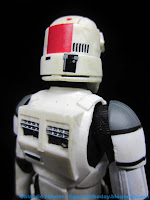 My favorite detail is the little reddish/orangey Imperial cog on the visor part of the helmet.  It's less obvious that's what this is on the 3 3/4-inch figures, so seeing it blown up here is a treat.  I love the stripes, I love the painted shoulder buckles, and the dirt ain't bad either.  It's a pretty good figure for the price, and a good idea for an exclusive figure.  It's not a significant player in the movie, so some fans could miss it and not care.    It's a trooper, so some fans would want a dozen of it.   It's similar to other Troopers that people like, so the chance to get more of the same - but different - could be quite engaging.   I was unable to find these pre-launch but jumped out at lunch on launch day to snag it and the Blu-Ray/DVD combo set.   Clearly the store that offers the exclusive figure on launch day has found a way to get me to buy a new copy of the movie rather than wait a few months for Zia Records to start selling used ones for half price.   Kudos, Target and Hasbro.

Collector's Notes: I got mine from Target.   A few sold prior to launch day, and a bunch were out on launch day despite being seemingly sold out beforehand.