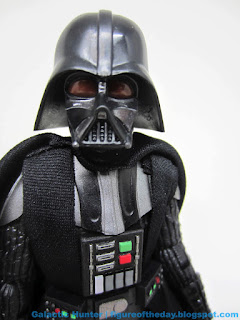 Bio: In a misguided attempt at saving the life of his wife and unborn child, Skywalker betrayed the Jedi, pledging himself to the teachings of his former confidant and friend, Supreme Chancellor Palpatine (secretly the Dark Lord of the Sith, Darth Sidious), thus becoming the Sith Lord Darth Vader. Palpatine shortly thereafter ended the war, destroyed the Jedi Order, and declared himself Galactic Emperor.  (Stolen from Wookieepedia.) 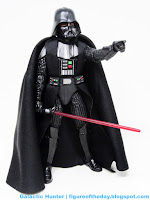 Commentary:  A new Darth Vader?  Sold!  This Rogue One and/or original Star Wars version was made to be part of an "original 12" update in the 6-inch line.  It's kind of amazing, because this isn't a grouping that Hasbro's previous caretakers have really exploited.  Heck, we're 22 years in to the 3 3/4-inch line relaunch and they're still not done updating the 1978-1985 line - so it's neat to see them pounce on a group of figures and update accordingly.   The costume tries to replicate the original Darth Vader suit, complete with red lenses on the helmet and the unique armor with shoulders covered in cloth robes.   He's even got the different gloves, with the ribbing going across the hand rather than parallel to the fingers.   I like it - and it has some decent features, too.

The articulation of a figure in The Black Series seems to be pretty much always the same - about 26 points of articulation is now normal, making Hasbro's Star Wars line better than most of what Mattel releases but not always as good as Hasbro's own Marvel Legends offerings.   Marvel's figures are more likely to have double-jointed elbows, while Hasbro has seemingly given them up for Lent and decided to stick with it for the long haul.   I love the color of the silver bits on his armor, the bright green and red lights, and that the gloves and boots are glossy while the "fabric" parts are a bit more dull.  The quilted pattern looks wonderful, and he has no problems standing or holding his lightsaber.  This is crucial. 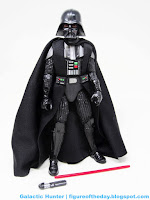 What really surprised me was the lightsaber - the blade is not only removable, but the hilt has a hook on it.  And the hook actually attaches to the belt - this is a detail often forgotten, so I really appreciate it.  Short of adding some bonus swappable hands to have a "let's choke Captain Antilles" pose there's not much else you could hope to get from a Hasbro Darth Vader, so I'd say they did a perfectly nice job consistent with their other toys.  The cape hangs a little strangely, but the fabric is nice enough and the figure is a gem when carded.

The diorama itself is nice, with the ability to connect multiple ones together.  The foot pegs are all the same size, which is almost good - if you'll recall, Hasbro didn't have a consistent foot peg size until after the third wave and they still haven't quite nailed it.   As such, some figures don't take to the pegs too well.  And yes, this includes the Stormtrooper.  And C-3PO, whose foot holes are too shallow.   It's pretty though - just be very very careful when applying the Star Wars label. I screwed mine up.  I'll probably buy another one at some point and try again, because I'm a dunce.

I'd say it's good enough for $40.  For less than that, you positively need to buy more than one - the figure's worth $20-$25, the diorama's no slouch for $15 or so.  It also has a reversible backdrop, so really you may as well get at least two of them.   I love the overall concept, but I doubt anybody would've minded Vader being sold individually - hopefully Hasbro boxes him later so even more people can have access to this figure.  For the price, I really like what Hasbro delivered.

Collector's Notes: This is a weird one - a carded Darth Vader figure to finish your set of the original 12 is sold in the Legacy Pack, which has a diorama in it.  So you have to buy this boxed thing, open it, and remove a carded figure from inside it.  I'd advise buying at least two of this set, especially since you might want more dioramas. I got mine from Entertainment Earth.